Trudeau's wife gets COVID-19 and drive-thru testing; In The News for March 13 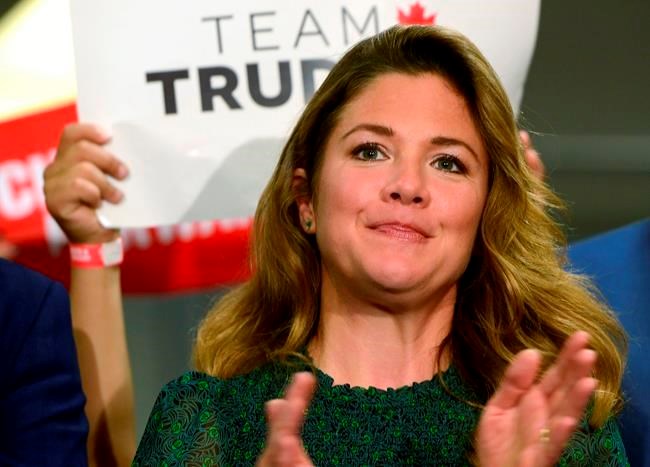 In The News is a roundup of stories from The Canadian Press designed to kickstart your day. Here is what's on the radar of our editors for the morning of March 13 ...

OTTAWA — The prime minister's wife is the latest Canadian identified for contracting the respiratory illness caused by the coronavirus that is spreading rapidly around the world.

The Prime Minister's Office announced late Thursday that Sophie Gregoire Trudeau tested positive for COVID-19, but she is feeling well, is taking all the recommended precautions and her symptoms remain mild.

Prime Minister Justin Trudeau is in good health with no symptoms, but will stay in isolation for 14 days and hold meetings by telephone or videoconferencing.

The announcement capped a day where provincial governments advised against international travel and Ontario announced plans to close its schools for two weeks because of COVID-19.

There was a slew of major event cancellations on Thursday, as keeping a distance from others to help prevent the further spread of the novel coronavirus was on full display.

The Juno Awards scheduled for the weekend in Saskatoon, the National Hockey League suspended its season and Major League Baseball ended spring training in Florida and pushed back the start of the season.

OTTAWA — Parliamentarians will consider today whether to take the unprecedented move of suspending Parliament because of the COVID-19 pandemic.

Members of the House of Commons administration committee could not agree Thursday on what measures to take to address the outbreak.

The Commons is sitting today before a planned one-week break, but discussions are underway about whether that break should be extended.

Two other cabinet ministers remain isolated with flu and cold-like symptoms and are also awaiting test results for the virus.

Finance Minister Bill Morneau, however, insisted the federal budget will be tabled on March 30 as planned.

VANCOUVER — An epidemiologist says drive-thru clinics testing people for COVID-19 in South Korea could serve as a model for Canada despite its comparatively lower infection rate.

Stephen Hoption Cann of the University of British Columbia's school of population and public health says drive-thrus in the city of Goyang allow people to stay in their cars as staff in protective clothing take samples from their throats and noses.

He says people with just a sore throat are being tested, even if they don't have a fever or cough, to reduce the spread of the novel coronavirus.

The measures also save time waiting for test results because samples don't have to be sent elsewhere for analysis.

Hoption Cann says people who test positive get a phone call and are placed in isolation before they can infect others and those who don't have the virus are informed by text message.

South Koreans are also using an app to determine high-risk areas from where COVID-19 has spread.

He says many of the lessons their country has learned came from its experience in 2015 during an outbreak of MERS — the Middle East Respiratory Syndrome.

WASHINGTON — U.S. House Speaker Nancy Pelosi says that she and the Trump administration are close to agreement on a coronavirus aid package to reassure anxious Americans by providing sick pay, free testing and other resources, hoping to calm teetering financial markets amid the mounting crisis.

Final details were being worked out, but the top House Democrat, who held daylong talks with Treasury Secretary Steven Mnuchin, is expected to make an announcement today. The House could then swiftly vote.

The potential deal between Congress and the White House would cap a tumultuous week in which Washington strained for a comprehensive response to the outbreak that is testing the nation's political, financial and health-care systems.

Trump has announced a month-long restriction on travel from most of Europe, set to begin today at midnight.

He said Thursday that he was considering other major restrictions, such as limiting travel to domestic hot spots like California and Washington state, without spelling out how he would manage such an extraordinary effort.

BEIJING — As a virus pandemic spreads globally, China and other parts of Asia are scrambling to prevent it from coming back to where it broke out.

Everyone arriving in Beijing must be quarantined for 14 days, and South Korea is screening arriving passengers from more countries as the number of cases rises across Europe.

Both countries have seen a decline in new infections, with China reporting just eight and South Korea 110 on Friday.

In a role reversal, China is evacuating its citizens from one virus-hit country and sending medical gear and doctors to help with outbreaks abroad.

From the pro leagues to the juniors, games all over the world are being cancelled by COVID-19. In Canada, the list includes:

— Hockey Canada cancels all its sanctioned activities, including national championships, until further notice.

— U.S. President Donald Trump suggestions to postpone the Tokyo Olympics for a year.

— MLB cancels the rest of spring training and suspends the start of the regular season by at least two weeks, impacting the Toronto Blue Jays.

— The UFC is going ahead with its Fight Night card Saturday in Brazil, but without spectators.

COVID-19 in the entertainment industry ...

Canada's biggest celebration of homegrown music, the Juno Awards, have been cancelled over concerns about the COVID-19 outbreak.

The big bash was to take place with thousands of fans and dozens of musical acts on Sunday at the SaskTel Centre in Saskatoon, and broadcast on CBC.

The Canadian Academy of Recording Arts and Sciences said Thursday morning the decision was made with input and guidance from local tourism and provincial health authorities.

The Junos news came around the same time that Saskatchewan's Ministry of Health announced the province had its first presumptive case of COVID-19.

The Canadian Screen Awards set for March 29 in Toronto have also been cancelled due to the COVID-19 outbreak.

In the U.S., entertainment industry is preparing for an unprecedented shutdown to curb the spread of the novel coronavirus, upcoming movies, suspending all Broadway performances and scuttling concert tours.

Restrictions on gatherings were enacted from New York to California, and dozens of cultural hubs were closed. Disneyland and Disney World are both shutting down in the next couple of days.