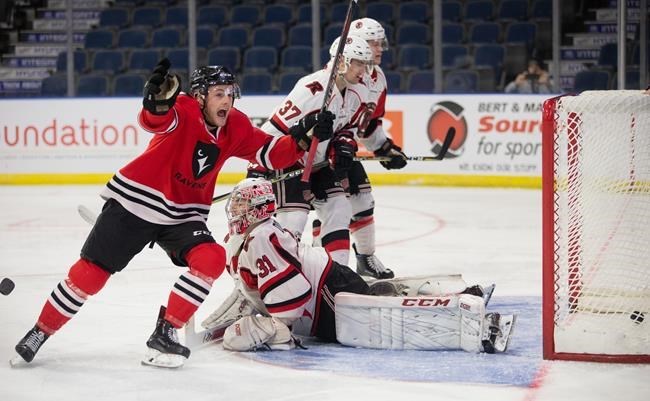 Connor Sanvido replied for the Pronghorns.

The Golden Bears will face the No. 5 Saskatchewan Huskies in a semifinal on Saturday.

Carson Stadnyk scored two goals to lead the Huskies to a 6-1 win over the No. 4 Guelph Gryphons in the opening quarterfinal on Thursday.

Guelph outshot the Huskies 32-27, but Saskatchewan was far better on special teams, going 3 for 4 on the power play while killing off the Gryphons' three chances with the man advantage.

"Special teams and goaltending is probably going to be the difference in a one-game competition or championship like this and ours was a little bit dead in the last game of the Canada West finals," Huskies coach Dave Adolph said. "We got a little life (Thursday), and hopefully it continues."

Friday's quarterfinals pit the No. 2 New Brunswick Varsity Reds against the No. 7 Carleton Ravens and the No. 3 Queen's Gaels versus the No. 6 St. Francis Xavier X-Men.

The final is Sunday.

Note to readers: This is a corrected story. Incorrect stats and an incorrect team name for Lethbridge appeared in a previous version.

AP sources: No consensus yet on NBA return-to-play plan
May 29, 2020 3:50 PM
Comments
We welcome your feedback and encourage you to share your thoughts. We ask that you be respectful of others and their points of view, refrain from personal attacks and stay on topic. To learn about our commenting policies and how we moderate, please read our Community Guidelines.