MOOSE JAW, Sask. — Laura Walker wasn't going to curl with a team this season. She was ready to dial back to mixed doubles events while she and husband Geoff Walker — Brad Gushue's lead — contemplated starting a family.
0
Feb 16, 2020 7:59 PM By: Canadian Press 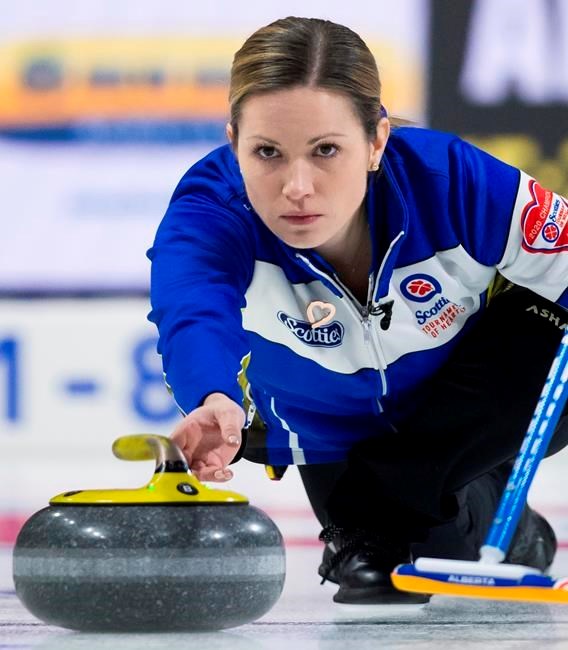 She was ready to dial back to mixed doubles events while she and husband Geoff Walker — Brad Gushue's lead — contemplated starting a family.

"I was pretty set on playing just mixed doubles and taking a little bit of time for myself," Walker said.

"Geoff and I are wanting to start a family. I just wasn't sure I could give the women's game 100 per cent any more.

"I wasn't prepared to join a team unless I knew I could give them 100 per cent."

So she declined Taylor McDonald's initial invitation to skip a team that included her, Kate Cameron and Nadine Scotland.

McDonald tried a second time with the message the team would accommodate any changes in Walker's life.

"I think the words that changed it for me was when Taylor said they would support me through anything because they 'hate that women feel like they have to choose,'" Walker said.

"Those were the words that kind of flipped the switch.

"I said 'you know you're right. I can do it all. I shouldn't have to choose. Knowing I have the support of my teammates was the biggest thing for me.'"

Added McDonald: "It would be a waste to see her talents sit on the sidelines for a year."

In their first season together, Walker, Cameron, McDonald and Scotland out of Edmonton's Saville Community Sports Centre went undefeated to win the Alberta women's championship.

Walker, 29, is making her Scotties Tournament of Hearts debut.

"I said I wasn't going to join a team unless I felt we could win," she said. "When I said yes, it was because I felt like we could compete.

"I didn't know we could do it right away, but I felt in the long run if we were work together we could do that. So far, so good."

Alberta topped Pool A on Sunday at 3-0 with Manitoba and Northern Ontario also undefeated at 2-0.

Saskatchewan was 2-1 and defending champion Chelsea Carey 1-1. Nunavut, Quebec and New Brunswick were still looking for their first wins of the tournament.

Ontario, B.C., Prince Edward Island and the wild-card team skipped by Jennifer Jones were bunched atop Pool B at 2-1.

Nova Scotia and Newfoundland and Labrador were both 1-1 ahead of Northwest Territories and Yukon at 0-2.

The Page playoffs are Saturday followed by Sunday's semifinal and final.

Her vice Cameron has the most Hearts experience.

The 28-year-old reached the final playing third for Michelle Englot when they represented Manitoba in 2017.

They lost to Ontario's Rachel Homan, but were given Team Canada status the following year in Penticton, B.C., when Homan was otherwise occupied competing in the Olympic Games.

Success for a new team doesn't come without bonding off the ice.

The four women worked with University of Alberta researcher and PhD student Shannon Pynn to enhance communication and interaction.

"You have to talk about it. You can't just hope that it's all going to fall into place," Walker said. "You could be doing something or saying something that's really bothering another person without ever intending to."

Jones trailed B.C.'s Corryn Brown 6-1 after four ends, but scored three in the fifth and stole four in the sixth to claw her way back into the game.

The six-time Canadian champion made a tough draw for two in the 10th for an 11-10 victory.

P.E.I.'s Suzanne Birt had last-rock advantage coming home in an extra end against Ontario's Homan and drew the four-foot rings to win 9-8.

An afternoon pre-draw ceremony honouring the late Aly Jenkins of Warman, Sask., had competitors and spectators wiping their eyes.

The 30-year-old curler died during childbirth in October.

Jenkins played lead for the Sherry Anderson team that lost the 2019 provincial final to Silvernagle.

"It's Saskatchewan, so it makes it so much more close to home," Martin said. "She was important to all of us."

This report by The Canadian Press was first published Feb. 15, 2020.

Montreal-based Canadian Grand Prix postponed due to COVID-19 pandemic
Apr 7, 2020 3:52 PM
Comments
We welcome your feedback and encourage you to share your thoughts on this story. We ask that you be respectful of others and their points of view, refrain from personal attacks and stay on topic. To learn about our commenting policies and how we moderate, please read our Community Guidelines.