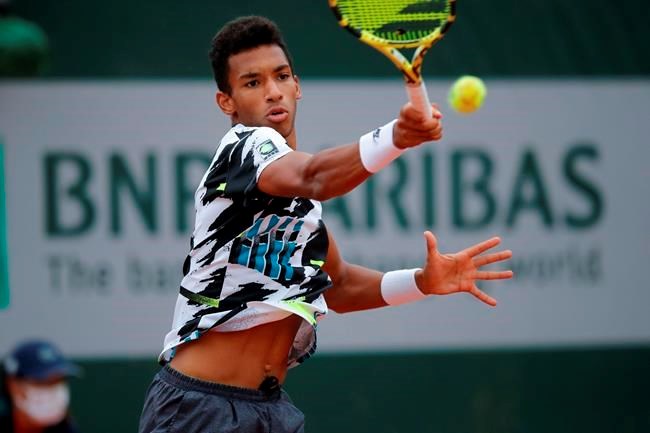 PARIS — Canada's Leylah Annie Fernandez rallied for a 1-6, 6-2, 6-3 victory over No. 31 seed Magda Linette of Poland in her main-draw debut at the French Open on Monday.

The 18-year-old from Laval, Que., won the girls' tournament at the clay-court Grand Slam last year before rising to the women's ranks.

"I'm actually pretty pleased with myself with the win today," said Fernandez.

"I've been having some success in the past few years here in Paris and I was just trying to use that energy and that positive vibe that I feel over here and push through in the second and the third set."

It marks the second straight Grand Slam in which Fernandez has won her opening-round match. The world No. 100 lost to top American Sofia Kenin in the second round of the U.S. Open.

The Canadian teenager says she stayed confident despite dropping the first set so easily.

"I've always believed that I can win the match. Even though I was losing 1-4, 1-5 in the first set, I always thought like I can come back and win the first set," said Fernandez. "But Magda, she played a great first set, a great match, and I guess when I came back in the second set right from the start I knew I can still turn it around and with that mindset that I had it helped a lot."

Fernandez will face world No. 47 Polona Hercog of Slovenia in the second round of the French Open.

Both of Canada's entrants in the women's singles draw have reached the second round.

Eugenie Bouchard of Westmount, Que., who received a wild-card into the event, beat Anna Kalinskaya of Russia on Sunday and will face Australia's Daria Gavrilova in the second round.

Meanwhile, Montreal's Felix Auger-Aliassime and Toronto's Steven Diez both are out of the men's competition after suffering first-round losses on Monday.

The loss for Auger-Aliassime continued a disappointing clay-court season for the 20-year-old Canadian. Since transitioning to the clay after a run to the fourth-round at the U.S. Open, Auger-Aliassime has won just one of four matches.

Nishioka is now 2-0 lifetime against Auger-Aliassime. The Canadian lost a third-set tiebreaker to Nishioka in Indian Wells, Calif., last year.

"Today was tough for me overall, what he was bringing in the match," Auger-Aliassime said after his French Open debut. "I knew him, knew it was going to be tough to go through him, (he was) going to put a lot of balls back. Obviously the conditions were not the best for me. ... He played good.

"Also, you know, I wasn't good, and I could have been better on many of those opportunities. So, you know, I give him credit and I take responsibility on that because I just felt like there is too many times where I just didn't step up and play a decent point."

Auger-Aliassime added the result was "difficult to accept."

No. 9 seed Denis Shapovalov of Richmond Hill, Ont., and Vancouver's Vasek Pospisil are scheduled to play their first-round matches on Tuesday.

This report by The Canadian Press was first published Sept. 28, 2020.

Businesses, cities look to give Canadians outdoor rec options during pandemic winter
Oct 27, 2020 8:04 AM
Comments
We welcome your feedback and encourage you to share your thoughts. We ask that you be respectful of others and their points of view, refrain from personal attacks and stay on topic. To learn about our commenting policies and how we moderate, please read our Community Guidelines.