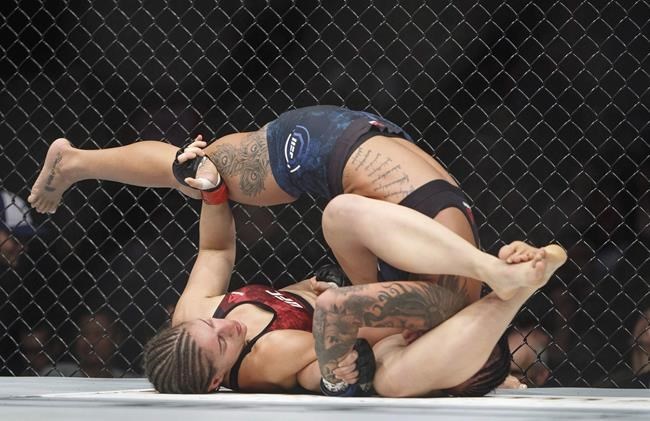 The judges scored it 30-27, 29-28, 29-28 for Melo, who came into the bout as a betting underdog. Moras's mouth fell open in surprise when the decision went against her. But Melo held a 56-44 edge in significant strikes according to UFC Stats, which had Moras attempting 200 strikes to 169 for the Brazilian.

"I think I controlled all three rounds, dominated the cage," said Melo. "She threw a lot of punches, but I barely got hit. I connected more. "

Moras and Melo were originally slated to meet in November but the fight was pushed back to January.

The five-foot-seven Moras, who held a two-inch height and reach advantage, looked to connect from distance in the first round. Moras kept circling, trying to avoid Melo's power, while attacking the Brazilian with low kicks and jabs.

Moras (6-8-0) lost her mouthpiece early in the second round after absorbing a blow to the face and was soon bleeding from the nose and mouth. Melo kept coming forward with Moras dancing away. Melo fought off a late Moras takedown attempt in the round.

It was more of the same in the third with Moras throwing jabs on the move and Melo unsuccessfully trying to chase her down.

Both fighters were in need of a win.

Moras, a native of Kelowna, B.C, who fights our of Las Vegas, has now lost five of her previous six fights.

The 32-year-old was coming off a decision loss last May to Sijara (Sarj) Eubanks, currently ranked 14th among 135-pound contenders. It was the first outing for the Canadian since September 2019 when she defeated Georgia's Liana (She Wolf) Jojua by third-round TKO at UFC 242 in Abu Dhabi.

Melo (11-8-0) had lost all three of her previous UFC fights, all by decision.

Moras, whose UFC career has been interrupted by injuries, is 3-6-0 in the promotion. Her Cheesecake nickname came after a friend dared her to come out to her first pro fight to the song "Cheesecake'" by the Muppets.

This report by The Canadian Press was first published Jan. 16, 2021