Brent Hayden will take that "seniors discount" at the pool in order to swim fast. Almost nine years after winning an Olympic bronze medal in the men's 100-metre freestyle, the 37-year-old from Mission, B.C.
Jan 14, 2021 3:13 PM By: Canadian Press 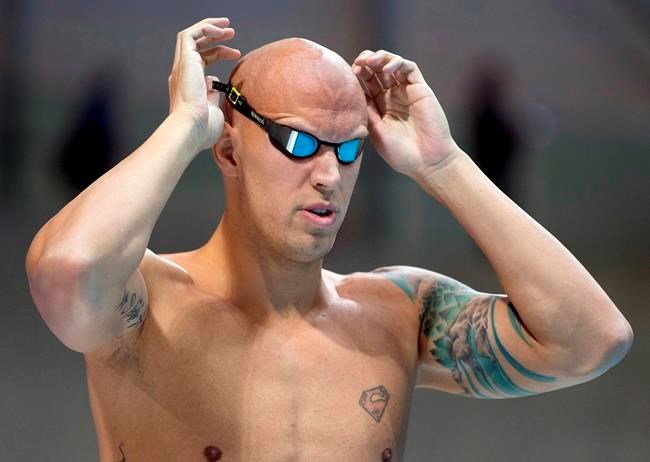 Brent Hayden will take that "seniors discount" at the pool in order to swim fast.

Almost nine years after winning an Olympic bronze medal in the men's 100-metre freestyle, the 37-year-old from Mission, B.C., says quality training, not quantity, will get him back on the Olympic starting blocks.

"For me, I call it the seniors' discount when the group's doing three rounds and Brent is only doing two rounds. Perfect," Hayden told The Canadian Press on Thursday.

"Training programs need to be tailored to the athlete."

Rest and recovery are important for Hayden particularly during his current arduous training block at the University of British Columbia Aquatic Centre.

"We're in a work phase right now and he's getting a little beat up, but he's swimming fast," his coach Tom Johnson said.

"He can't do the work that a 22 or 24-year-old can do, but the work he does is high quality. The respect factor the people in his training group have for him is really high."

Hayden, the 2007 world champion and 2011 world runner-up in the 100 freestyle, got back into the pool after a seven-year hiatus because he fell in love with swimming again.

"I'm excited to get up on the blocks and put a real stamp on this whole comeback thing," Hayden said.

Canada's Olympic swim trials in April in Toronto and by extension this summer's Tokyo Summer Olympics are his goals if the COVID-19 pandemic doesn't derail them.

"My wife and I were already discussing what if Tokyo doesn't happen?" Hayden said. "Does that mean this whole comeback would have been for nothing? I don't think so.

"I'm feeling like I'm only getting stronger and faster, so if Tokyo doesn't happen, do I just commit and decide 'you know what? I'm going to go to Paris in 2024 and compete as a 40-year-old.' Is that what my story is going to be? That is a possibility."

Less than six months into his comeback, Hayden swam under the 50-metre freestyle Olympic qualifying standard in Des Moines, Iowa.

He captained the International Swimming League's Toronto Titans in Budapest, Hungary in October and November.

""He just got better and better swimming against the best in the world over a five-week time period," Johnson said.

Hayden had fallen out of love with swimming by the time he stepped on the podium in London in 2012.

Back spasms that made walking painful and the immense pressure Hayden put on himself to produce an Olympic medal on his third try put him in a dark place.

"I was teetering on the edge of depression there for awhile," Hayden recalled. "That definitely weighed into my decision to retire when I did. If I continued swimming, I saw myself going deeper into that hole. It's not a place I wanted to go.

"When I did leave, the sport was not in a good place in my heart."

Hayden continued to hold swim camps across Canada, but rarely worked out in the pool.

He searched out a pool to shoot an instructional video in the summer of 2019, when he and wife Nadina Zarifeh were in Lebanon.

"Getting in the water and putting myself through these drills, I started to realize I felt amazing," Hayden recalled.

"My stroke felt really finely tuned, which was weird. I started playing around with my speed a little bit."

He returned to competition with a different lens on his sport and himself. Hayden is comfortably frank about the mental struggles that contributed to his retirement at 28.

"Coming back into the sport now, I'm in such a healthy state of mind," Hayden said.

"I definitely came up through the (ranks) feeling if you were struggling emotionally, you don't want your teammates or your competitors to see that because you don't want to be viewed as weak.

"What I'm hoping others will see is allowing yourself to be vulnerable actually takes more courage than holding it in."