EDMONTON — Connor McDavid and the rest of the Edmonton Oilers big guns, embarrassed in their home opener, feasted Thursday on the Vancouver Canucks.
Jan 14, 2021 9:31 PM By: Canadian Press 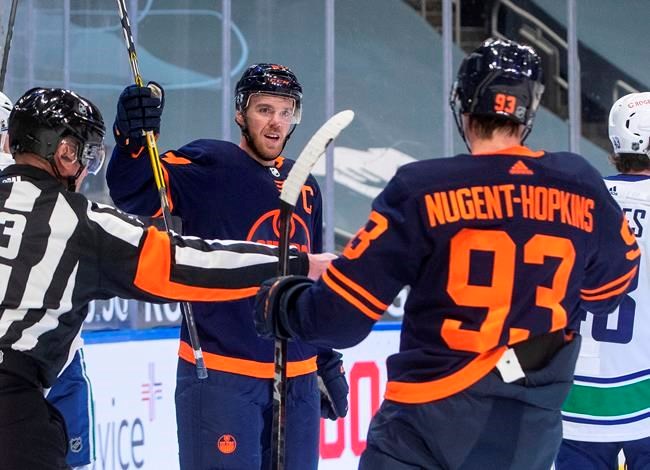 EDMONTON — Connor McDavid and the rest of the Edmonton Oilers big guns, embarrassed in their home opener, feasted Thursday on the Vancouver Canucks.

McDavid scored a hat trick and added an assist as the Oilers beat the Canucks 5-2 for their first win of the NHL season.

Leon Draisaitl, the NHL’s top scorer last season, added four assists. Ryan Nugent-Hopkins scored twice and added a helper, taking the sting out of a 5-3 loss to the Canucks Wednesday.

McDavid said all phases of the game were working, adding that high scores and defensive lapses may be a feature of the truncated 56-game season.

“The power play was good. The (penalty kill) was good,” said McDavid

“I think the hockey games have gone the way I kind of expected, a little bit more high scoring than they might be at this time of year if it was a normal year, and that’s across the league.”

Draisaitl said, “I thought it was a very solid game.

“Yesterday was not the way that we want to show up and we want to play. I thought it was a great response tonight.”

The game was held in front of no fans and empty stands at Rogers Place to prevent the spread of COVID-19.

Mikko Koskinen, making his second start in two nights, turned back 38 shots for the win. Mike Smith was supposed to start but was declared inactive, forcing Koskinen into back-to-back starts.

Nate Schmidt and Tyler Motte replied for Vancouver and Thatcher Demko stopped 41 shots in the loss.

Both teams now have one win and one loss in what will be an abbreviated regular season, with all seven Canadian teams playing each other exclusively in the North Division, often on back-to-back nights.

“I thought they came out a lot harder than we did to start the game, put us back on our toes early,” said Schmidt.

“We’ve got to get used to this. This is going to happen.

“You play the same team on back to back nights in their own building, it’s going to happen. You know you’re going to get a better effort out of them after we come in and win game one of these mini-series we’re going to be having all year.”

Vancouver defenceman Quinn Hughes had an assist and now has three on the season.

Draisaitl now has five points on the year – all assists.

The Oilers also got their power play back on track. They scored twice with the man advantage after going 0 for 4 on Wednesday. Edmonton had the top power play in the NHL last season at 29.5 per cent effectiveness.

The game saw Edmonton hold the edge in play, but the Canucks refuse to go away.

Nugent-Hopkins opened the scoring on the power play at 7:59 of the first period. He jumped on the rebound when a Draisaitl wrist shot clanged off the post, backhanding the puck over the goal-line.

McDavid made it 2-0 on an extraordinary goal with less than one second to go in the period. Draisaitl won the faceoff to Demko’s left, drew the puck back to Kailer Yamamoto, who fired the puck off Demko’s pad. McDavid drove to the net and, with Schmidt draped all over him, flipped the puck up and under the crossbar.

There were four goals in the second period. Schmidt made it 2-1 when he blasted a low slapshot from the point through traffic that bounded in and out of the net so fast it wasn’t immediately clear it had gone in.

McDavid then restored the two-goal lead, on the power play, racing at full speed into the Canuck zone, catching Vancouver defender Alex Edler flat footed, cutting inside and delivering a no-look blazing wrist shot stick side and in.

Motte brought Vancouver back to within one, deflecting a low blue-line slapshot from Travis Hamonic past Koskinen.

Then McDavid again, jumping in front of Demko, taking a seeing-eye pass from Draisaitl and jamming the puck in on the rebound for his seventh NHL regular season hat trick.

The last time he got a hat trick was also in front of no fans, in early August against the Chicago Blackhawks in the so-called bubbled play-in round to determine the 2019-20 season playoff seeding.

After he scored in August, arena staff hustled down the stairs and honoured hockey tradition by tossing ball caps over the glass and onto the ice to mark the hat trick. McDavid later said he found the lid toss an unnecessary distraction.

This time, no hat toss.

Edmonton made it 5-2 with just over eight minutes left in the game. Nugent-Hopkins drove to the net through traffic and redirected a Yamamoto pass past Demko.

Notes: It was the second of 10 meetings between the two teams. Vancouver now heads to Calgary for games on Saturday and Monday. Edmonton hosts Montreal on those same two nights. Oilers goalie Stuart Skinner was called up from the taxi squad to back up Koskinen.