The COVID-19 pandemic has forever left its mark on Montreal Alouettes linebacker Henoc Muamba and his family. Mamba's mother-in-law, Elizabeth Tweneboah, died in June after contracting the novel coronavirus. She was 66.
Jan 14, 2021 9:56 AM By: Canadian Press 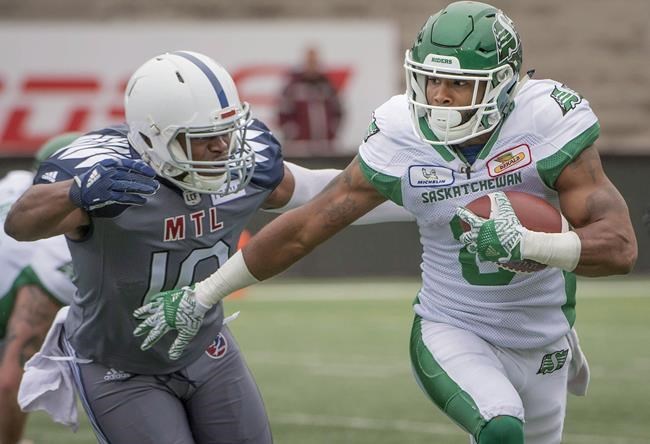 The COVID-19 pandemic has forever left its mark on Montreal Alouettes linebacker Henoc Muamba and his family.

Mamba's mother-in-law, Elizabeth Tweneboah, died in June after contracting the novel coronavirus. She was 66.

That resulted in Muamba and his wife, Jessica _ who's expecting their second child any time now _ becoming the primary caregivers for Muamba's 27-year-old sister-in-law, Joyce, who has some disabilities and endured mental health issues.

The pandemic also cost Muamba, 31, financially as the CFL didn't play last year. But that certainly pales in comparison to what Muamba - who was born in the Democratic Republic of Congo and raised in Mississauga, Ont. - and his family continue to deal with.

"It's definitely challenged all of us to grow in many ways ... and rethink our times together," Muamba said in a phone interview. "One of the things my wife and I have been intentional about, as of late, is just being present in the moment.

"You never know how fleeting life is and I think it's a great reminder of not only being present in each moment that you spend with loved ones but also just remembering those people."

Muamba's mother- and sister-in-law both lived downstairs in the family's Brampton, Ont., residence. Muamba said Tweneboah began suffering body aches initially before the family took her to hospital as a precaution.

But upon arrival, Tweneboah was admitted immediately. On the same day, the Muambas learned they'd be having a second child.

Henoc Muamba said while Tweneboah was a diabetic, she'd shown no signs of being ill.

"She'd been healthy, strong," he said. "She'd had her business (beauty supplies store) and even after that she was doing things, she never liked staying still.

"She was just an entrepreneur at heart ... she'd always be talking about it and we'd laugh and tell her, 'Man, you have to learn how to rest,' and she'd say, 'What do I need to rest for? I have a lot of energy and I'm going to continue doing this.' She always found people to help. That was her, that was her heart."

But Muamba said after a few days in hospital, Tweneboah was put on a ventilator. She died roughly two weeks after being admitted.

"That was extremely difficult," Muamba said. "But we're a family of faith and I think that's one of the things that's really been our backbone and kept us strong.

"But the passing of my mother-in-law may change a lot for me and my family because her presence was a big reason why I was able to practically play football anywhere in Canada. I knew my wife and daughter were in very, very good hands. There's nothing like a mother's help and that gave me great peace playing in Montreal and leaving my family here."

Muamba said Tweneboah packed a lot of living into her 66 years.

"She was an amazing woman who impacted so many people and I don't just say that because of the circumstances," he said. "She was originally from Ghana and was a pillar of the Ghanaian community.

"She's one of six (kids) and was always thinking about one of her siblings or close friends. She'd go grocery shopping for her friends or get their medicine all the time. Since her passing, my mother-in-law's closest friend calls my wife and sister-in-law literally every day and that's just a single testament to the impact my mother-in-law had on people. As sad as it is, one thing I keep reminding my wife is that, man, she had a life that was well lived."

But Tweneboah's passing also meant Muamba and his wife becoming responsible for his sister-in-law's care. She was born with Retinopathy of Prematurity (ROP) - an eye ailment - and cognitive developmental delay (a condition where intellectual function and adaptive behaviour are significantly below the expected average for their age).

She also has a learning disability and the early onset of psychosis, which affects how the brain processes information.

"And despite all that she's still functioning and thriving," Muamba said proudly. "She's in college and just finished her last semester and is on to the next one.

"I'm actually challenging her to write a book because I think people need to hear her story. She needs to talk about her story just to provide inspiration, not only to those around her but the world. She's a miracle child ... no matter how high the odds have been against her, she's been thriving and I think that will be a platform."

And in honour of her mother, Muamba's wife has applied to medical school.

"That was one of the last conversations my wife had with her mother and she encouraged my wife and told her she should do it if that's what she wanted to do," Muamba said. "One of the stories my wife brings up is she was still feeling nauseous but had to write an exam and said, 'I don't know how to do this. What if I throw up?'

"Me just being the person I am, I told her, 'OK, bring a bag and if you throw up, just continue writing.' She said, 'You're right,' and ended up going. The amount of inspiration and motivation right in front of my eyes has been extremely heartfelt and amazing but we're all drawing from the strength of my mother-in-law's life."

That matter-of-fact approach has served the six-foot 230-pound Muamba well in football. The top defensive player in Canadian university football in 2010, the former St. Francis Xavier star is entering his 10th pro season and has played on both sides of the border.

"Football has taught me so much ... and allowed me to grow in ways I don't know I would have if I didn't play the game," he said. "It has helped me now ... but I think it's hard or impossible to put yourself in this situation if you're not in it.

"It's definitely been difficult. I'd be lying if I said because I played football I was fully prepared for a situation like this, especially something that happened so suddenly."

The Muambas are expecting another girl and have settled upon the name Adah, which in Hebrew means "beautiful ornament." The youngest Muamba's middle name will also include her grandmother's maiden name.

And after growing up with two brothers - Cauchy and Kelvin have also been with CFL teams - Muamba's household now features a majority of females.

"I think it's God's way of balancing things out," Muamba said with a chuckle.