A month ago, Jared du Toit wasn't even sure he'd be playing in the Latinoamerica Qualifying Tournament in Mexico.
Jan 22, 2020 4:00 AM By: Canadian Press 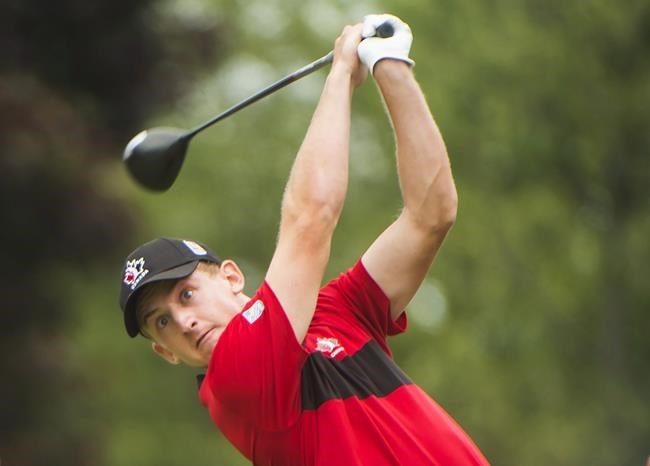 A month ago, Jared du Toit wasn't even sure he'd be playing in the Latinoamerica Qualifying Tournament in Mexico. He'd been frustrated with the state of his game for all of the 2019 season and drilled hard for most of November and December trying to get things back on track. By the time the holidays rolled around, he was fed up.

But fast forward to last Sunday and he'd won the event at the Estrella del Mar Golf & Beach Resort, earning a full exemption for the PGA Tour Latinoamerica season.

"I talked to the people close to me, my coaches and family and everyone was kind of like, 'Nah, just go do it,'" said du Toit, who had consulted with Golf Canada coach Derek Ingram and Dr. Adrienne Leslie-Toogood, a mental performance coach with the national program, among others.

"So then I really committed to doing it and really good practices and whatnot and I felt really good for tee off and then obviously played well in the event so it was a big relief getting it done."

The 24-year-old du Toit shot 5-under 67 in the final round to finish the week at 22-under 266 overall for a two-stroke win over Mexico's Juan Carlos Benitez.

Du Toit took a full break from golf for two weeks over the holidays — he didn't even bring his clubs home with him to Kimberley, B.C. — to clear his head. When he returned to Arizona he set aside all of the thinking and work he'd done before the holidays, created a plan of attack, and returned to playing. That hard reset helped him clear his mind ahead of the qualifier.

"Honestly, I think with all that going on my expectations probably weren't the highest," said du Toit, who shot a 5-under 67 in the opening round in Mexico before a 68-64-67 finish. "So maybe when I went down there and I started out great, it was just kind of felt like it was playing with house money."

The PGA Tour Latinoamerica season doesn't start for another six weeks and du Toit expects he'll use that time to find more consistency in his game, play some mini tour events and maybe take on some Monday qualifiers on the Korn Ferry Tour. When the Latinoamerica season does kick off, it will be right back at Estrella del Mar, which du Toit sees as an advantage.

"I've probably played 15 rounds on that golf course over the years so I'm very comfortable with it," said du Toit. "It's kind of this unique blend of grasses that it took me awhile to adjust to. Whether other people struggle with that adjustment or not, it's definitely a thing.

"I think my experience on that golf course will help me out and hopefully I can get off to a great start to the season."

It's expected that du Toit will be named to Golf Canada's Young Pro Squad for a third straight year. He was previously on the organization's amateur squad, including in 2016 when he tied for ninth as an amateur at the RBC Canadian Open at Glen Abbey Golf Club in Oakville, Ont.

"Golf Canada has been very good to me over the last four or five years," said du Toit. "Basically my first real coach was from Golf Canada. They've been really good to me and I would love to keep that relationship going for as long as I can."

PGA TOUR — Michael Gligic of Burlington, Ont., is the highest ranked Canadian in the field at the Farmers Insurance Open at Torrey Pines Golf Club in San Diego this week. He's No. 146 in the FedExCup standings, followed by Roger Sloan (154) of Merritt, B.C., Mackenzie Hughes (212) of Dundas, Ont., and Graham DeLaet (219) of Weyburn, Sask.

KORN FERRY TOUR — Ben Silverman of Thornhill, Ont., was tied for 20th at 8-under par heading into the fourth round of The Bahamas Great Abaco Classic at Baha Mar in Nassau. Adam Svensson of Surrey, B.C., was tied for 37th at 6 under and Taylor Pendrith of Richmond Hill, Ont., was in a group tied for 63rd at 1 under.

BRITISH OPEN — Toronto's Richard T. Lee became the third Canadian to qualify for this year's British Open on Sunday after finishing fifth at the SMBC Singapore Open. The Singapore Open — a US$1-million tournament that is co-sanctioned by the Asian Tour and Japan Tour — is included as part of the Open Qualifying Series. Corey Conners of Listowel, Ont., and Adam Hadwin of Abbotsford, B.C., had previously qualified for the major.

LPGA TOUR — Brooke Henderson of Smiths Falls, Ont., tied for fourth at the season-opening Tournament of Champions this past weekend. Her partnership with retailer Golf Town was extended on Tuesday, two days ahead of the Gainbridge LPGA at Boca Rio Golf Club in Boca Raton, Fla. Hamilton's Alena Sharp will also be in the field.

This report by The Canadian Press was first published Jan. 22, 2020.

Sunday's Games
Sep 20, 2020 9:48 PM
Chase Claypool sets Canadian NFL record with 84-yard touchdown reception
Sep 20, 2020 7:58 PM
Przybylko scores twice, Union beat 10-man Impact 4-1
Sep 20, 2020 7:33 PM
Comments
We welcome your feedback and encourage you to share your thoughts. We ask that you be respectful of others and their points of view, refrain from personal attacks and stay on topic. To learn about our commenting policies and how we moderate, please read our Community Guidelines.