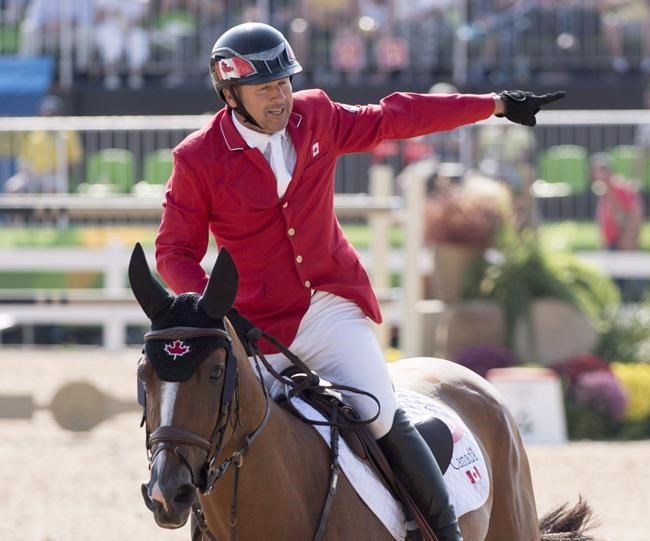 Olympic gold medallist Eric Lamaze will be making his seventh consecutive appearance for Team Canada at the World Equestrian Games next month.

The 39 Canadians athletes who will compete in seven disciplines — dressage, endurance, eventing, jumping, para-dressage, reining and vaulting — in Mill Spring, N.C., from Sept. 11 to 23 were revealed Saturday.

The 50-year-old from Schomberg, Ont., will be atop 12-year-old chestnut gelding Chacco Kid, which he began riding in 2016, for the championship.

"We are taking a young horse and giving him a chance," he said.

"He's a horse that I am very excited about and hope we will see great things from in the future."

The move will see him leave his mount Fine Lady at home.

"Fine Lady had her championships at the Olympics in Rio. I think the world championships would be too much for her at this stage in her career," said Lamaze.

"She is 15 years old this year and we carefully select our events in order to keep her fit and healthy. It was a tough choice, but the best interest of the horse is our No. 1 priority."

Lamaze, who is currently ranked third in the world, will be joined on the squad by his pupil Kara Chad of Calgary.

The 22-year-old will be making her world championship debut atop an 11-year-old grey mare Carona.

"I'm very proud that Kara made the team," said Lamaze. "She paid her dues and was a very gracious alternate for us at the Rio Olympics. Now, she has the opportunity to be a part of the team."

Here is the remaining Canadian squad: