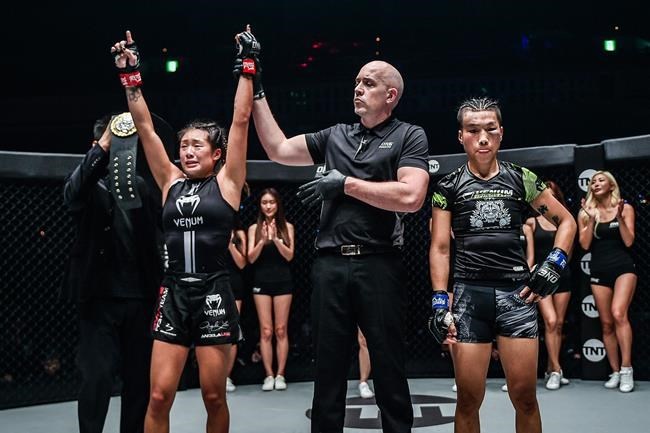 Lee submitted China's (The Panda) Xiong Jing Nan via rear-naked choke in the fifth round after putting her opponent down with a belly-to-belly suplex. Brazil-born Fernandes choked out Kevin (The Silencer) Belingon of the Philippines in the second round.

One Championship staged two separate "One-Century shows on the same day at the Ryogoku Kokugikan in Tokyo despite Typhoon Hagibis. Organizers did warn spectators to take extra caution.

Angela Lee lived in Vancouver and elsewhere in Canada until she was seven, when the family moved to Hawaii. Angela, who has dual Canadian-American citizenship,

Lee, who now splits her time between the Hawaiian island of Oahu and Singapore, comes from a fighting family. Father Ken and mother Jewelz are decorated martial artists who teach at their United MMA gym in Waipahu.

Ken was born in Singapore and Jewelz in South Korea. She moved to Hawaii at a young age while he came to Canada at the age of four. They met in Hawaii when Ken went there for high school, moving to Canada after graduation and eventually marrying.

Sunday marked the third straight meeting between Fernandes and Belingon and fourth in total.

Fernandes won by submission the first time they met in January 2016. Belingon took a split decision in November 2018 and Fernandes won by disqualification (illegal elbows to the back of the head) in March.

Fernandes' journey to Canada was bumpy.

mother died when he was seven and he was sent to live with his aunt in the Amazon jungle.  As a young teenager, he survived by selling ice cream on the streets and by cleaning cars and houses. He often opted for payment in food rather than money.

He was 14 when a benefactor paid for some jiu-jitsu lessons at a neighbourhood gym. Fernandes took to it quickly, and when money for the lessons ran out, he started cleaning the gym to pay his way.

Fernandes was at a jiu-jitsu competition in California some 15 years ago years ago when he was invited to come north and train. He liked what he saw and stayed.

This report by The Canadian Press was first published Oct. 13, 2019.

Montreal-based Canadian Grand Prix postponed due to COVID-19 pandemic
Apr 7, 2020 3:52 PM
Comments
We welcome your feedback and encourage you to share your thoughts on this story. We ask that you be respectful of others and their points of view, refrain from personal attacks and stay on topic. To learn about our commenting policies and how we moderate, please read our Community Guidelines.