VANCOUVER — Spencer Foo and the Calgary Flames young guns made the most of their chance to impress Cail MacLean on Tuesday night.
Sep 19, 2018 11:07 PM By: Canadian Press 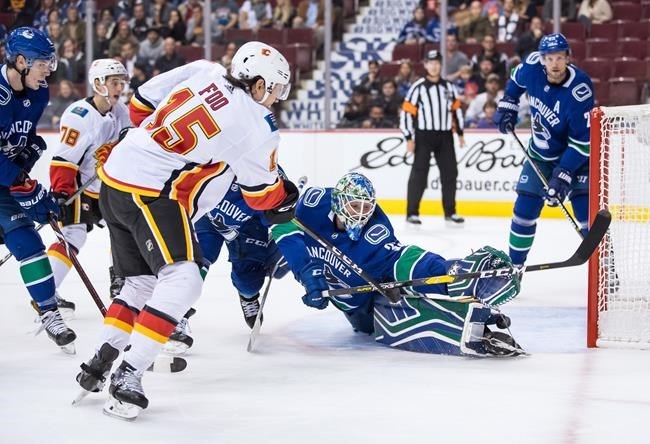 VANCOUVER — Spencer Foo and the Calgary Flames young guns made the most of their chance to impress Cail MacLean on Tuesday night.

MacLean felt Calgary's prospects went into the pre-season game against the Vancouver Canucks knowing they had a unique opportunity, with many of the Flames veterans off in China playing a series of exhibition matches. MacLean himself was a substitute as Calgary beat Vancouver 4-1 while Flames head coach Bill Peters was with the group in Asia.

"Guys that you might not know as well and guys that might not have as big a role when the whole squad is here, I think they did a good job," said MacLean, head coach of Calgary's AHL team, the Stockton Heat.

"They know that things are going to change here when people come back and opportunity is going to be harder to come by and I think they did a good job of taking an advantage of that."

Foo and Mangiapane played a combined 14 games in the NHL last season. Phillips and Valimaki are rookies.

Calgary rookie Dillion Dube notched an assist on Mangiapane's goal, and said all of his teammates pitched in for the win.

"That's how we have to play right now as we wait for the older guys to come back. But I think we've been doing well for ourselves," he said. "I think for us, people are doubting us because we're a young team. But there's lots of legs in here, we're a fast team."

The Flames also had help from goalie David Rittich, who stopped all 26 shots he faced in the first two periods. The 26-year-old Czech backed up Mike Smith in Calgary last year, earning a 8-6-0 record and .904 save percentage.

He was relieved in the third frame Wednesday night by Tyler Parsons, who stopped 12-of-13 shots.

Canucks netminder Thatcher Demko held off 18-of-21 21 shots in the first two frames before he was replaced by Michael DiPietro. DiPietro turned away all 11 shots he faced.

Despite the final score, Vancouver had ample chances throughout the game.

Brandon Sutter had an opportunity to put his team on the board early in the second with a penalty shot, but the veteran centre couldn't burry the backhanded shot.

The Canucks also got looks from some young prospects, including Adam Gaudette, Kole Lind and Petrus Palmu, who all had rockets turned away by Rittich.

With so many fresh faces on the ice, there were some nerves to start off the game, said Canucks defenceman Erik Gudbranson.

"It was a young game. A very young game," the veteran said, adding that he was impressed by some of the performances. "There were a lot of guys that played really well that surprised me. Obviously you want to win it, but there's positives to take from that."

The Canucks are in the midst of a rebuild after finishing second last in the Pacific Division last year with a 31-40-11 record.

But deciding who to add to the regular season roster is difficult, head coach Travis Green said after Wednesday's game.

Many of the young athletes in the club's pre-season lineups won't wear a Canucks jersey this year, he added, but that doesn't mean they won't benefit from exhibition play.

"(Pre-season games) were a good taste for some of them," Green said. "Some of them are going to learn a lot from playing in these games. And it's important that we talk to them and make sure they're getting the right lessons.

Vancouver has one more exhibition game at home on Thursday when they'll host the L.A. Kings. The club will then hit the road, for contests in Calgary, Salt Lake City, Edmonton and Kelowna, B.C.

The Flames are off to Winnipeg on Friday to face the Jets.