TORONTO — This is what Dougie Hamilton was hoping for while he waited out the pandemic shutdown that put the NHL season on hold, and then waited some more after injuring himself in practice when the Hurricanes returned to the ice.
Aug 13, 2020 9:10 PM By: Canadian Press 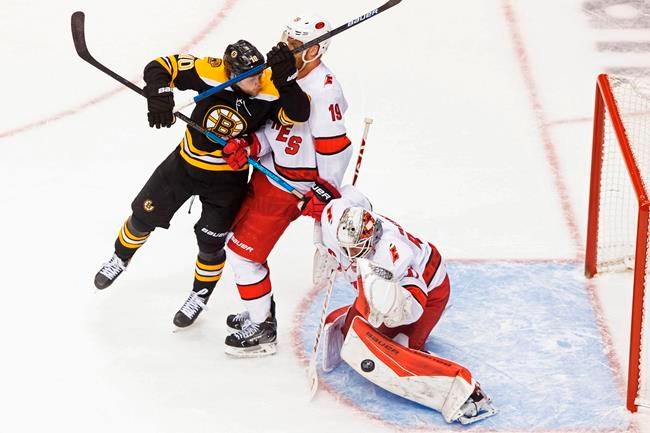 TORONTO — This is what Dougie Hamilton was hoping for while he waited out the pandemic shutdown that put the NHL season on hold, and then waited some more after injuring himself in practice when the Hurricanes returned to the ice.

The Carolina scored the game-winner with 11:30 left in the third period on Thursday night to lead the Hurricanes to a 3-2 victory over the Boston Bruins — the team that drafted him, and then gave up on him — and tie their playoff series at one game apiece.

“For seven months you’re thinking about that kind of stuff: Playing a game, scoring a goal,” said Hamilton, who missed the last 21 games of the regular season and the qualifying round series against the Rangers with separate injuries. “That’s what fuels you.”

One day after Boston won the delayed, double-overtime opener, Carolina's No. 2 goalie James Reimer stopped 33 shots to beat the Presidents' Trophy winners. Andrei Svechnikov had a goal and an assist, Teuvo Teravainen also scored, and Martin Necas had two assists for the Hurricanes.

David Krejci and Brad Marchand scored for Boston, and Tuukka Rask made 23 saves. The Bruins, who swept Carolina in the Eastern Conference finals last season, pulled the goalie for an extra attacker and had a chance when Reimer lost his stick in the final 10 seconds, but couldn’t convert.

“We weren’t expecting to walk through this series,” Marchand said. “We knew it was going to be a hard-fought battle all the way to the end. That’s the series we’re in.”

A 2011 first-round draft choice who played his first three seasons in Boston, Hamilton broke his leg in January and, after that had healed, left a return-to-play practice in July. He didn't return until Wednesday's series opener against the Bruins.

“You sink to the bottom when you’re injured. Sitting around, can’t walk, watching the guys play,” Hamilton said. “(You) wait for this moment. You don’t know if it’s ever going to come, but you’ve got to believe in yourself.”

After playing a playoff career-high 26:48 in Game 1, which Boston won 4-3 in double overtime, Hamilton led the Hurricanes with 24:20 of ice time on Thursday.

“He was special, and obviously a huge game tonight,” coach Rod Brind'Amour said. “He answered the bell on that. Pretty good performance tonight.”

The opener was supposed to be Tuesday night, but the quintuple overtime game between the Blue Jackets and Lightning kept the rink occupied. With the games on back-to-back days, Brind’Amour opted to go with Reimer in net instead of Game 1 starter Petr Mrazek; Boston's Bruce Cassidy sent Rask back out about 16 hours after he played 81:13 in the opener.

Brind’Amour was so unhappy after the loss that he called the league a joke, telling the Raleigh News & Observer: “This one’s a crime scene.” The league fined him $25,000 and threatened to double it if he acts up again.

He had something else to complain about in this one, when the referee waved off a go-ahead goal with 16:34 left in the third because Teravainen interfered with Rask before the goalie kicked the puck into the net. The Hurricanes challenged, but the call was confirmed.

Brind'Amour declined to comment on the sequence, saying “I think I'll get in trouble.” But his players said his tantrum showed he had their backs.

“To see him sticking up for us yesterday, we’re going to go to bat for him,” Hamilton said. “We all respect him so much and play hard for him no matter what. But when he said that, we wanted to win for him, and rally for him.”

The Bruins were without forward David Pastrnak, who tied for the league lead with 48 goals this season and was the team’s leading scorer with 95 points. Although the team gave no details on his condition, video appeared to show him injuring himself while celebrating Patrice Bergeron’s game-winning goal in Wednesday’s 4-3 victory in double overtime.

Cassidy said Pastrnak's injury did not appear to be a long-term issue and would probably be a game-time decision on Saturday.

The Bruins took the lead with about four minutes left in the first -- scoring first for the first time since before the pandemic shutdown. Krecji got he puck at the blue line and, with Jordan Staal stickless, he faked twice and then fired one past Reimer.

It stayed that way until the Hurricanes picked up a power play with about five minutes left in the second. Svechnikov made a spinning, cross-ice pass to Teravainen, who wristed it in to tie the score 1-1.

Just 88 seconds later, Svechnikov scored himself, taking a pass from Necas in the slot and beating Rask over his right shoulder.

But Boston tied it with just 5 seconds left in the period when Bergeron’s shot rebounded off the post right to Marchand, who punched it in to make it 2-2 heading into the third.

Game 3 is Saturday at noon.

Doc Rivers out as Clippers' coach, after seven seasons
Sep 28, 2020 3:56 PM
Comments
We welcome your feedback and encourage you to share your thoughts. We ask that you be respectful of others and their points of view, refrain from personal attacks and stay on topic. To learn about our commenting policies and how we moderate, please read our Community Guidelines.