Andrew Harris is back for another year with the Winnipeg Blue Bombers. The veteran running back signed a one-year contract extension with his hometown team Friday. But the 33-year-old Winnipeg native was more than willing to commit to a longer deal.
Jan 15, 2021 11:18 AM By: Canadian Press 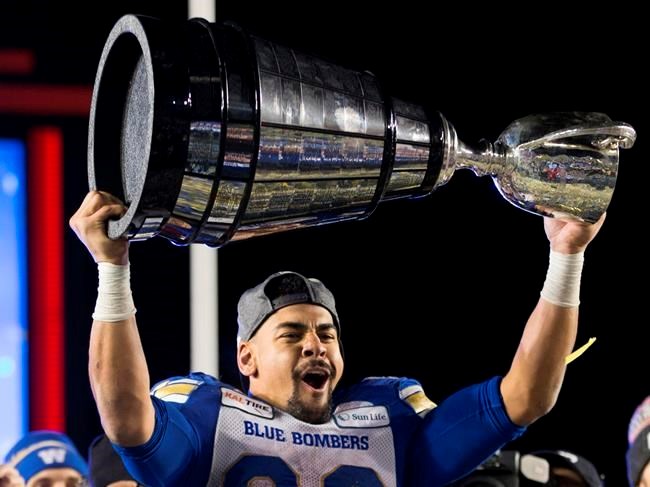 Andrew Harris is back for another year with the Winnipeg Blue Bombers.

The veteran running back signed a one-year contract extension with his hometown team Friday. But the 33-year-old Winnipeg native was more than willing to commit to a longer deal.

"I would've signed a five-year (extension) to be honest with you," Harris said with a chuckle during a videoconference with reporters. "I don't know if you could see a 39-year-old running back.

"For me, I'm taking it year by year, I've always been that way. You're always one hit away from this being over so you have to take it play by play, day by day and year by year. For me, it's nothing different there."

Financial details weren't divulged but many CFL players have re-signed for less money with the league having not operated in 2020 due to the COVID-19 pandemic. Harris said the extension was never about money.

"Everyone is feeling the effects on the financial side," he said. "We all have to kind of adapt to that.

"For me, it was a seamless conversation, an easy conversation with Kyle (Bombers' GM Kyle Walters). We both kind of understood each other and where we're at. It wasn't too difficult to get to where we are today."

Harris will return for a fifth season with Winnipeg. He has led the CFL in rushing the past three years. He was named the game MVP and most valuable Canadian in Winnipeg's Grey Cup win over Hamilton in 2019.

During the 2019 season, Harris passed Ben Cahoon to become the CFL's career leader in yards from scrimmage by a Canadian. He also moved past Normie Kwong as the Canadian career rushing leader.

A five-time CFL all-star, Harris also was named the league's most outstanding Canadian in 2017.

Cowan was Ottawa's sixth-round pick in the CFL draft. He played university football at Wilfrid Laurier in Waterloo, Ont.

Maxwell was Calgary's fifth-round pick in 2018 out of UBC. He had six special-teams tackles with Calgary in 2019 before signing with Ottawa.

Dandridge had 12 defensive tackles and four pass breakups in four games in 2019 with Ottawa.

Roberson had 20 defensive tackles in 11 games for Toronto in 2018, his last action in the CFL.

Ellis led all Redblacks with 54 tackles while tying for the team lead with seven sacks and forcing one fumble in 2019.

Ciraco, 24, has started 34 career regular-season games since being selected in the first round, No. 6 overall, by Hamilton in the 2018 CFL draft. The six-foot-four, 292-pound native of Burlington, Ont., has also participated in four playoff games with the Ticats.

Lyles, a native of Surrey, B.C., was an eighth-round pick by the Lions in 2019. He played seven games for the Lions in his rookie season.

Davis is back with the Lions after two years with Saskatchewan.

The Syracuse product started his CFL career with B.C. in 2016.

This report by The Canadian Press was first published Jan. 15, 2021.