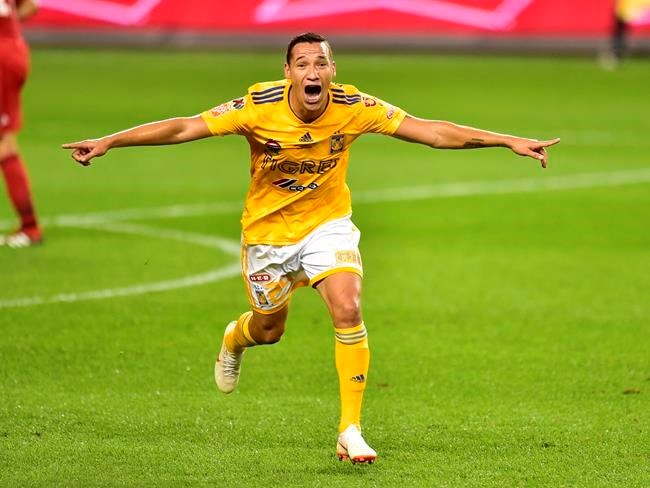 Toronto started brightly against the Mexican champions Tigres UANL but went behind late in the first half after its defence was breached and was never able to dig itself out of the hole.

The result was a measure of revenge for the Mexicans, ousted by Toronto in March in the CONCACAF Champions League quarter-finals on the away goals rule.

For TFC, it was another game gone awry. Like the rest of the season, there were some good moments and a few more bad ones.

Down 1-0 at the break, Toronto gave up two goals in three minutes midway through the second half.

"As has been too often the case, we have a few minutes of madness in the second half where the game gets out of reach," said captain Michael Bradley. "Those things are disappointing. But I think on the night there were still a lot of positives, a lot of good things."

Jesus Duenas scored twice for Tigres, which also benefited from an Eriq Zavalata own goal.

Lucas Janson scored a consolation goal for Toronto in the 86th minute via the penalty spot after Duenas, hit in the arm by a cross from Brazil's Auro, was called for a handball. Toronto finished strong but the outcome was already decided.

"It's a tough team," midfielder Jonathan Osorio said of Tigres. "They deserved to win today and congratulations to them."

Toronto had its chances. Jay Chapman hit the crossbar and then later hit teammate Tosaint Ricketts with a shot. Defender Nick Hagglund had a good chance with a header.

The teams will now return their attentions to league action. Toronto, desperate for points in its bid to climb back up the standings, plays at the New York Red Bulls on Saturday.

"Everybody's waiting for us to fail, to not make the playoffs, to make it official," said Osorio. "We're under the gun every game and it shouldn't faze anybody by now. This group needs to be ready, we're ready to go Saturday and that's it."

Toronto is nine points out of the playoffs with six games to play — and no margin for error remaining.

"It wasn't easy because TFC has a good team and has good-quality players," Tigres coach Ricardo (Tuca) Ferretti said after the match through an interpreter.

Toronto started well but Tigres got into their rhythm midway through the first half.

Duenas put Tigres ahead in the 36th minute after Brazil's Juninho floated a fine ball over the Toronto defence. Duenas left Zavaleta and Gregory van der Wiel in his wake and, ignoring a chasing Bradley, beat goalkeeper Alex Bono to the near side with a left-footed shot.

There was more bad news for the home side when Sebastian Giovinco exited in the 40th minute with calf cramps.

Duenas doubled the advantage in the 64th minute, lashing home a right-footed shot on a clearance from a corner. Two minutes later, substitute Enner Valencia beat Hagglund down the flank and his cross went in off Zavaleta.

Both teams have struggled of late.

Tigres (4-3-2) are currently seventh in the Mexican standings although they are unbeaten in four (2-0-2). Toronto (8-16-4) has struggled to keep its head above regular-season water and stands 19th overall in MLS (ninth in the East), nine points out of the playoffs.

Toronto fielded a strong lineup with nine of the 11 starters used against Tigres in CONCACAF Champions League play getting the call again. Defenders Drew Moor and Chris Mavinga missed out through injury while playmaker Victor Vazquez, as he did in the Tigres series, started on the bench.

Bradley, for the second game in a row, dropped back to anchor a back three.

Tigres kept Mexican winger Jurgen Damm (who spent two years in Toronto as a child) and Ecuador's Valencia on the bench to start.

Wednesday's game was not part of the season ticket-holders' package so drew a small announced crowd of 14,823 to BMO Field with the top half of the East stand closed off.

Toronto leads the way with a 4-6-3 record against Mexican clubs.

In March, TFC defeated visiting Tigres 2-1 — thanks to an audacious 89th-minute backheel by Osorio — and lost 3-2 in Monterrey. A 73rd-minute free kick goal by Giovinco proved to be the away goal that decided the tie for Toronto.

Toronto, which also beat Club America in the CONCACAF club semifinals, eventually lost on penalties to Chivas Guadalajara in the final. The MLS champions have stumbled every since.

"Since our CONCACAF run, due to certain circumstances, we have dropped a level ," said Osorio. "But there's no time to think about that. We have a very important game on Saturday."