SOUTHAMPTON, England — Defending-champion Arsenal was eliminated from FA Cup competition following a 1-0 fourth-round loss Satuday to Southampton. Adding insult to injury was the defeat came the result of Gabriel's own goal.
Jan 23, 2021 8:21 AM By: Canadian Press 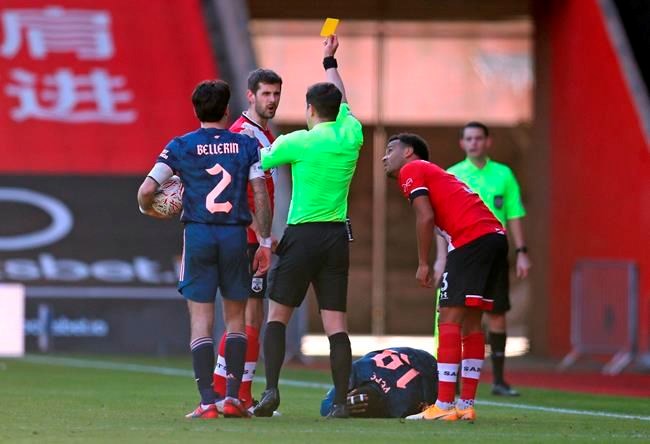 Adding insult to injury was the defeat came the result of Gabriel's own goal. His decision to try to block a shot from Kyle Walker-Peters proved costly for Arsenal.

Right-back Walker-Peters was allowed plenty of space to overlap the Arsenal , but his shot looked to be heading narrowly wide of the far post before Gabriel's failed attempt deflected the ball off the post and in. It was the first goal Arsenal had conceded since Dec. 26 after five consecutive shutouts.

"I’m very disappointed because we wanted to continue in the competition, we had a dream to do it again like last year and the dream today is over,” Arsenal manager Mikel Arteta said. "I am as well disappointed with the way we conceded the goal in an area where we know we shouldn’t be doing that.

"At the same time, I cannot fault the effort of the players, how they tried and how they went to get a goal in the second half.”

Arsenal has won the FA Cup a record 14 times and Arteta before kickoff called it “our competition.” Pierre-Emerick Aubameyang scored both of the team's goals in the 2-1 win over Chelsea in last year's final, but he wasn't available Saturday due to what Arteta called “a personal matter.” Arteta said he couldn't yet predict when Aubameyang might return.

Southampton moves on to a fifth-round game away at Wolverhampton, which beat sixth-tier Chorley on Friday.

Premier League clubs Manchester City, Brighton, West Ham and Sheffield United are all in action later Saturday against lower-league teams. There is also a rescheduled Premier League game between Aston Villa and Newcastle.