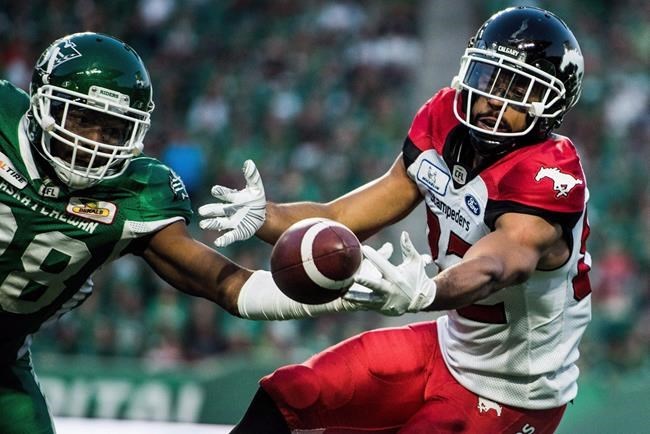 Juwan Brescacin is living proof of just how valuable depth is in the CFL.

The Calgary Stampeders (10-2) continue to roll along this season despite the loss of stalwart receivers Eric Rogers (knee), Kamar Jorden (knee) and DaVaris Daniels (broken collarobone). Rogers has been out since undergoing surgery in August while Jorden suffered his season-ending injury in the club's 23-20 Labour Day win over Edmonton.

And Daniels was hurt in Calgary's 43-38 road win Friday over Hamilton. But even with the three blue-chip receivers out, the Stampeders' offence accumulated 436 total yards versus the Tiger-Cats with Reggie Begelton (five catches, 150 yards, TD) and Brescacin (five receptions, 109 yards) both stepping up. Begelton was named one of the CFL's players of the week.

"The GM and coaches do a great job of scouting players and we always have guys waiting to play," Brescacin said. "Unfortunately it comes at the price of your fellow teammates, your brothers, getting hurt but guys are always ready."

Patience has paid off for Brescacin, a Mississauga, Ont., native who was selected in the second round, No. 15 overall, by Calgary in the 2016 CFL draft out of Northern Illinois.

"It can be tough mentally just because you're practising, going to meetings and lifting and yet you're not seeing the rewards in terms of the work you're putting in," Brescacin said. "But it also keeps you hungry and the guys who can be mentally tough and just wait it out are the guys who come in and make an impact right away."

The six-foot-three, 222-pound Brescacin certainly did that versus Hamilton, registering season highs for catches and receiving yards. The 25-year-old has also recorded career bests in receptions (21), yards (365) and TDs already this season.

And Brescacin narrowly missed delivering a dramatic ending to Edmonton's wild 48-42 win over Calgary on Sept. 8. A former basketball player, Brescacin got his hands on Bo Levi Mitchell's 49-yard Hail Mary pass between three Eskimos defenders in the end zone but couldn't come down with the ball on the game's final play.

"If I dwelled on the Edmonton game I probably wouldn't have come in and had the same impact I did in Hamilton," Brescacin said. "It builds character.

"I would've loved to make that catch. I was telling myself I was going to make the game-winning catch and it didn't happen but I just try not to dwell on things like that."

With Calgary being on the bye week, Rogers has more time to get healthy. The Stampeders will resume their '18 schedule Sept. 28 at home to the Toronto Argonauts.

Calgary heads into the final third of the regular season comfortably atop the West Division standings. The Stampeders have a six-point advantage over the Edmonton Eskimos and Saskatchewan Roughriders (7-5 each) although both are in action Saturday against Ottawa and Toronto, respectively.

However, the Stampeders still have plenty to play for, most notably clinching the top seed in the West for home-field advantage in the conference final for a third consecutive year and fifth time in six seasons.

And a big reason why Calgary's offence has managed to continue rolling along despite the injuries to its receiving corps is quarterback Bo Levi Mitchell.

"Being smart and also the passer he is, that's why he's so successful."

Mitchell has led Calgary to a Grey Cup title (2014) and been named a league MVP (2016) But the Stampeders have endured bitter disappointment the last two years, being upset by Ottawa and Toronto, respectively, in the CFL's marquee game.

"I feel like it's just as important as it was the last two years," he said. "We want to get there and win, not just because the media or fans are  saying we can't do it.

"We want to win for ourselves, for our team because we know the work we put in to get to this point."