WINNIPEG — The promoters of an NFL pre-season game in Winnipeg remained enthusiastic in the hours before Thursday's kickoff despite some earlier fumbles.
0
Aug 22, 2019 5:30 PM By: Canadian Press 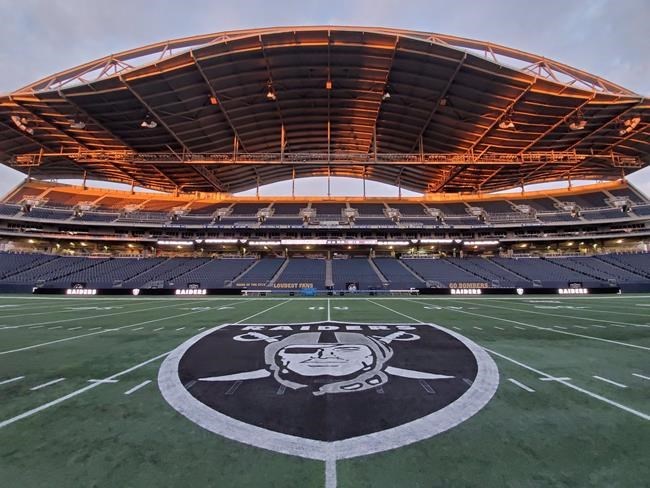 WINNIPEG — The promoters of an NFL pre-season game in Winnipeg remained enthusiastic in the hours before Thursday's kickoff despite some earlier fumbles.

City Coun. Kevin Klein thanked the Oakland Raiders and Green Bay Packers on Twitter for choosing to play in the city, even if it meant they faced some "social media bumps" along the way.

There were many online jabs after some players arrived wearing "Winnipeg, Alberta" shirts.

Raiders punter A.J. Cole apologized to the city and responded to a Twitter user that he'd purchased the shirt on Amazon, saying he's "just a kid from Atlanta, Florida playing football in Oakland, Nevada with a low geography IQ."

Safety Johnathan Abram was also spotted in the same shirt in a photo posted on the Raiders website.

Organizers of the game received word from NFL inspectors late Wednesday that IG Field, home of the CFL Winnipeg Blue Bombers, was approved for play. But to get there, Dale said, it was all hands on deck for three days following a soccer game Monday.

Goalposts had to be pulled out and specially ordered NFL posts were brought in and mounted, which involved digging holes and filling concrete 1.5 metres deep.

CFL Bombers logos and lines were stripped off the field which was repainted to match NFL regulations. An entire edge of asphalt around the field was replaced with synthetic turf.

Even the team rooms had to be reconfigured.

There was also plenty of skepticism about whether the game would fill seats. Tickets sales appeared slow with people pointing to high prices. Lower-bowl seats cost about $300, although end-zone tickets were recently reduced through a sponsorship deal to $75 from $164.

Earlier this week, the president and CEO of the Bombers announced the team would hold a viewing party downtown.

"Based on the price of these tickets, there was going to be a lot of fans who wouldn't be able to afford to come to the game and we wanted to make sure that our season-ticket members and football fans in the entire community had a place to gather and have a great event,'' said Wade Miller.

Dale said there was a lot of ticket movement in the last few days and he was eager to see seats full of football fans.

Thirty youth and members from northern Manitoba First Nations were being flown in to attend the game. There was also to be an area for members of the Armed Forces and their families. Amateur football players will on deck to hold the Canadian and American flags at the game.

Dale said it's clear from their Winnipeg-themed arrival that the players were excited, too.

The game is the first NFL contest in Canada since the Buffalo Bills completed a run of eight games in Toronto with a regular-season clash against the Atlanta Falcons in 2013.

With a little help, new Canadians make a curling connection in Winnipeg
Jan 29, 2020 9:09 AM
Comments
We welcome your feedback and encourage you to share your thoughts on this story. We ask that you be respectful of others and their points of view, refrain from personal attacks and stay on topic. To learn about our commenting policies and how we moderate, please read our Community Guidelines.