AURORA, Ont. — A busy week of media commitments, two pro-ams and an intensive practice session with her coach had taken a toll on Anne-Catherine Tanguay.
0
Aug 22, 2019 5:35 PM By: Canadian Press 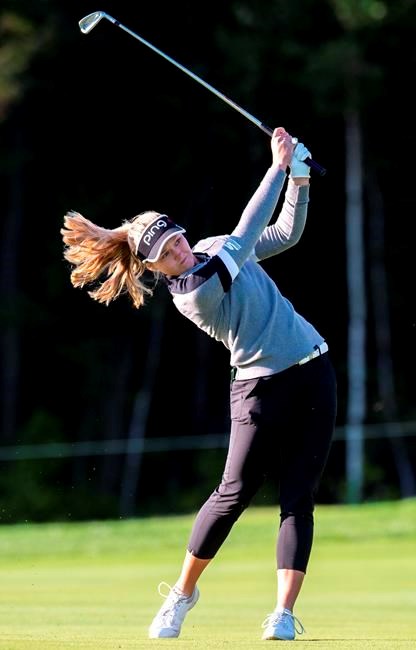 AURORA, Ont. — A busy week of media commitments, two pro-ams and an intensive practice session with her coach had taken a toll on Anne-Catherine Tanguay.

When the Quebec City native woke up on Thursday morning ahead of the first round of the CP Women's Open, one of Tanguay's eyes was red and puffy. Fearing that she had caught a cold or some other ailment, Tanguay called her doctor asking what to do.

"He said 'I'm glad you called me. You did the right thing,'" said Tanguay. "He just said to take allergy medicine and put ice on it. If it was going to get red and sticky to just call him again tonight and he was going to write me a prescription.

"I think it didn't even cross my mind today so it's fine now."

Tanguay then laughed and asked reporters if she looked OK.

She was more than OK playing in the afternoon wave, firing a 6-under 66 to finish the first round of Canada's national women's championship in a five-way tie for second with Jin Young Ko, Nicole Broch Larsen, Pajaree Anannarukarn, and reigning champion Brooke Henderson of Smiths Falls, Ont.

Tanguay served as one of Golf Canada's ambassadors in the days leading up to the national women's championship, played an 18-hole pro-am on Monday and a nine-hole round on Wednesday before spending hours on the range with coach Tristan Mullally, trying to iron out kinks in her drives.

"Honestly it's been a busy week, so my preparation was, I don't know — I don't want to say less than ideal, but I just came into it and I really had low expectations," said Tanguay.

As two of five Canadians on the LPGA Tour, Tanguay and Henderson have formed a close bond over the past year. Even though they're both in contention at the CP Women's Open, Tanguay's rooting for her fellow Canuck.

"I saw (Henderson's round) on TV this morning and saw Brooke was playing well," said Tanguay. "Just kind of laughing. 'Wow, Brooke loves to play well at home.'

"Feels good to be able to put a good round together for me today."

Megan Osland of Kelowna, B.C., was the third lowest Canadian behind the Tanguay-Henderson duo, shooting an even-par 72 to finish the day in a tie for 65th.

Osland has been playing on the Symetra Tour since 2016 and the 26-year-old is targeting an LPGA card within the year. She missed the cut at the U.S. Women's Open earlier this year after qualifying for last year's CP Women's Open.

"This is my third LPGA event and I think each one I've played I get a little bit more comfortable," said Osland. "Just the whole atmosphere, there's a lot going on.

"Now I'm just embracing it and enjoying it instead of being nervous or thinking of it as something that's so big or whatever. I feel way more comfortable out here, I would say, this year."

Brittany Marchand of Orangeville, Ont., Celeste Dao of Notre-dame-de-l'Ile-Perrot, Que., and Maude-Aimee Leblanc of Sherbrooke, Que., were tied for 128th after identical rounds of 5-over 77.

"I'm actually super happy," said Thibault, an amateur on Fresno State University's varsity golf team. She last played in the CP Women's Open in 2016. "I'm definitely disappointed about the score, putting wasn't there today and I had no birdies.

"But overall, I'm just really glad to see how much I've grown since the last time I was here, and how comfortable I feel out there. It's a huge step for me to know that."

"It was very exciting to be able to play in this sort of environment," said Liu, who was fighting tears of frustration while speaking with reporters. "I am disappointed. There were a lot of mistakes. Taking the wrong club, bad chipping."

Former Toronto FC fullback Ashtone Morgan signs with Real Salt Lake
Jan 29, 2020 7:28 AM
Comments
We welcome your feedback and encourage you to share your thoughts on this story. We ask that you be respectful of others and their points of view, refrain from personal attacks and stay on topic. To learn about our commenting policies and how we moderate, please read our Community Guidelines.