OTTAWA — It's no longer a surprise to see Marcus Hogberg come up with a big game for the Ottawa Senators. The rookie goalie was once again solid, making 32 saves in Ottawa's 3-2 win over the Arizona Coyotes on Thursday night.
Feb 13, 2020 8:11 PM By: Canadian Press 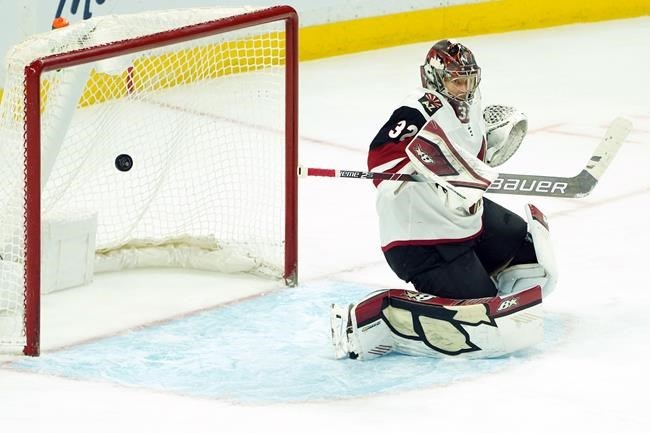 OTTAWA — It's no longer a surprise to see Marcus Hogberg come up with a big game for the Ottawa Senators.

The rookie goalie was once again solid, making 32 saves in Ottawa's 3-2 win over the Arizona Coyotes on Thursday night. Hogberg's record of 3-5-7 is hardly indicative of his play of late as the 25-year-old has easily been one of the Senators' best players.

"A couple games we've kind of left him out to dry at the start," said Brady Tkachuk, who scored his 17th of the season to give the Senators a 2-0 lead by the first intermission. "We wanted to put the pressure off him and try to get pucks behind and be physical and try to create turnovers and I thought we did that pretty well in the first and a little in the second."

Hogberg was at his best in the second period when Ottawa was outshot 13-8 making great saves on Vinnie Hinostroza and Nick Schmaltz.

One of the young goaltender's best attributes is his ability to stay focused amid chaos.

"Me and (goalie coach Pierre Groulx) talk a lot to try and be more calm and don't move too much," said Hogberg. "I think that's helping me a lot."

Vladislav Namestnikov and Nick Paul also scored for the Senators (19-27-11) in front of 9,762 fans at Canadian Tire Centre as Ottawa played the first of a season-high six game home stand.

Arizona wrapped up its four-game road trip Thursday with a 1-2-1 record. The Coyotes are in a heated playoff race in the Pacific Division and hope to gain ground on Calgary and Vegas.

"Not ready to go, my fault," said Coyotes coach Rich Tocchet. "The game plan was there. Ottawa likes throwing pucks to the net and we just didn't box out. I thought (Raanta) could have helped out on the dump in on the first one, but saying that we were chasing the game after that."

As much as the Coyotes feel a sense of urgency with 22 games remaining, they understand the need to stay focused.

"We can't look too far ahead," said Ekman-Larsson. "We've got to look at the next one here on Saturday I believe. On Saturday we've got to get some wins together at home and play better and go from there."

Paul then gave the Senators a two-goal lead as Raanta got a piece of his snapshot, but it got past the Arizona goalie and dropped into the net.

The goal was Paul's first since Dec. 30th. The 24-year-old missed 10 games due to injury and is still fighting to become a regular in the NHL.

"There's very few games this year he hasn't had good legs," said Smith. "He's a dependable guy that can play in all situations so great to see him score after getting that one taken away the other night and he was really good again. He's playing every game to stay in the league and those are the hungry guys you want on your team."

Mark Borowiecki was injured as the play developed as he collided near the Senators bench and hobbled off the ice.

Smith said there was no fracture, but that Borowiecki would likely be "out some time." The team expects to have a better idea Friday of what they're dealing with.

Hogberg made impressive saves on Vinnie Hinostroza and Nick Schmaltz in the second period. Arizona was finally able to beat him with a power-play goal late in the period.

Ekman-Larsson took a feed from Taylor Hall and put a shot through traffic that took a bounce off Namestnikov on its way to the net.

Ottawa opened the scoring just 2:50 into the first period as Drake Batherson chased down a dumped puck and dropped a pass back to Namestnikov who beat Raanta from in close.

Tkachuk made it 2-0 as he tipped Thomas Chabot's point shot for his 17th of the season.

Notes: Ottawa's Tyler Ennis played in his 600th career game. ... Borowiecki returned to the lineup after missing the last two games for the birth of his son Miles.

This report by The Canadian Press was first published Feb. 13, 2020.

NHL Capsules
Aug 4, 2020 11:00 PM
Tuesday's Games
Aug 4, 2020 10:55 PM
Comments
We welcome your feedback and encourage you to share your thoughts. We ask that you be respectful of others and their points of view, refrain from personal attacks and stay on topic. To learn about our commenting policies and how we moderate, please read our Community Guidelines.