Saskatchewan Roughriders aim to bring home energy on the road to B.C. Lions

VANCOUVER — The Saskatchewan Roughriders are hoping they can bring the spirit of Regina with them on their final road trip of the season. The Roughriders visit the B.C. Lions on Friday night at B.C.
0
Oct 17, 2019 6:47 PM By: Canadian Press 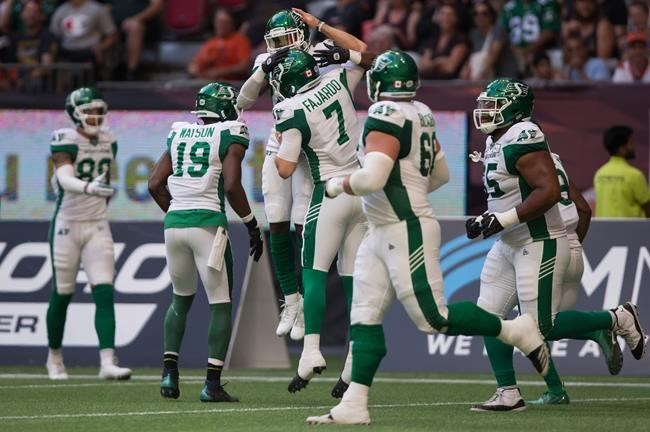 VANCOUVER — The Saskatchewan Roughriders are hoping they can bring the spirit of Regina with them on their final road trip of the season.

The Roughriders visit the B.C. Lions on Friday night at B.C. Place, a stadium where they have had success earlier in the season. This time, however, the CFL's West Division playoff race is hanging in the balance.

Saskatchewan is 7-1 on home turf but just 3-4 in away games in 2019. The Roughriders are playing three of their last four regular-season contests on the road while the NHL has taken over Mosaic Stadium in preparation for its Heritage Classic game between the Winnipeg Jets and Calgary Flames on Oct. 26.

"Adversity — it reveals character," said Saskatchewan head coach Craig Dickenson on Thursday. "We knew this schedule was in place from the very beginning and we knew we wouldn't be able to practise on our home field for a few weeks. We're okay with it.

"We focus on what we can control, which is our preparation, our practise habits, our weight room habits. We're not concerned necessarily about where we have to play."

The Riders are now tied with the Calgary Stampeders atop the CFL's West Division after falling 30-28 at McMahon Stadium last Friday. Both clubs have identical 10-5 records, while the Winnipeg Blue Bombers have played one additional game (10-6) and the Edmonton Eskimos sit fourth (8-8).

"We have to be road warriors," said Saskatchewan quarterback Cody Fajardo. "These are big games. We need to win every single one of them. We didn't do ourselves any favours last week against Calgary.

"We're a really good team, a really tough team at home and we know our crowd energizes us. We've got to be able to find ways to be energized running out on the field in someone else's stadium."

Signed by Saskatchewan as a backup quarterback after one year with B.C., Fajardo seized the Roughriders' starting job earlier this season, after Zach Collaros was injured in the season opener. In 15 games with Saskatchewan, Fajardo has connected on 71 per cent of his passes and thrown for 15 touchdowns. He ranks third in the CFL with 3,649 passing yards.

The Lions (5-11) are the only West Division team the Riders have beaten on the road this year. One week after a 38-25 victory over the Lions at home in July, Saskatchewan recorded a 45-18 victory at B.C. Place. But even with the Lions now out of the playoff picture, they aren't taking their opponent lightly.

"I see a team that's going to come out swinging," said Fajardo. "They have nothing to lose.

"I've been on teams where we were last in the league. That's a scary thing when you have guys fighting for jobs. At that point, it gets a little more personal, you've got to play for yourself."

Danny O'Brien will make his first career CFL start at quarterback for the Lions in Reilly's place. The 29-year-old O'Brien has dressed as a backup in 97 games over six seasons, including two years behind Reilly in Edmonton before both moved to the Lions this season.

The Roughriders will also be missing a key player from their lineup. On Thursday, the team announced that defensive tackle Micah Johnson was placed on the one-game injured list with a reported ankle injury.

Rookie Charbel Dabire will take Johnson's place in Saskatchewan's starting lineup. He has five tackles and one sack in nine games this year.

INTO THE STRETCH: After facing B.C., the Roughriders will finish out their regular-season schedule with a home-and-home series against the Eskimos.

WESTERN WOES: The Lions are 0-8 against West Division opponents this season. With a bye in Week 20, they'll finish out their schedule by hosting the Stampeders on Nov. 2.

BEST NEWCOMERS: On Thursday, the CFL announced the 134 players eligible for the league's most outstanding rookie award. Current Roughriders linebacker Solomon Elimimian won the award in 2010 as a member of the Lions.

THIRD TIME UNLUCKY: The Lions have now missed the playoffs twice in three years for the first time in 27 seasons. They reached the post-season just once between 1989 and 1992.

This report by The Canadian Press was first published Oct. 17, 2019.

Montreal Impact return to training centre for individual outdoor workouts
May 25, 2020 2:44 PM
Comments
We welcome your feedback and encourage you to share your thoughts. We ask that you be respectful of others and their points of view, refrain from personal attacks and stay on topic. To learn about our commenting policies and how we moderate, please read our Community Guidelines.