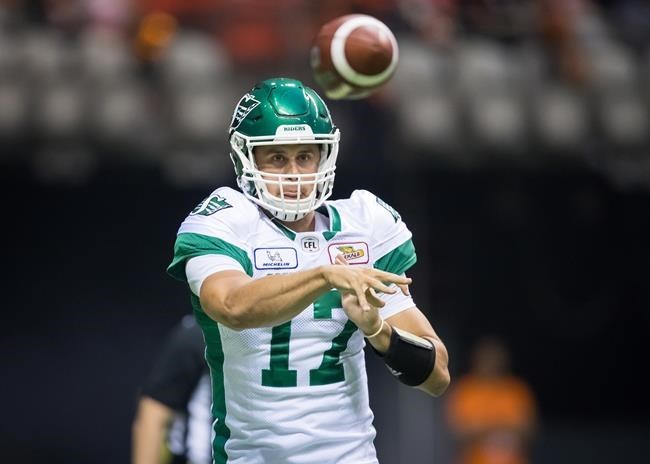 The first-year Saskatchewan Roughriders quarterback carries a 3-0 CFL record as a starter on the September long weekend into Sunday's key home game against the Winnipeg Blue Bombers (5-5).

Statistics also are on Collaros’ side in another respect. Saskatchewan, which has a winning record (5-4) despite having scored a league-low 11 offensive touchdowns, is 3-1 in games that he has started and finished — a stat that does not surprise Roughriders general manager/coach Chris Jones.

"He has won a lot of football games at the high school level and the college level," said Jones, who acquired Collaros from the Hamilton Tiger-Cats in January. "We brought him here for a reason.

"He's a leader. He's a good player. He’s certainly not perfect — none of us are — but I'll tell you what he is. He's a worker. He's in here every morning. He's got the receivers in there, meeting extra, and he's meeting with the other quarterbacks. He melds with our offence extremely well, and we like what he brings to the table.”

Collaros started the Roughriders’ season opener — a 27-19 victory over the visiting Toronto Argonauts on June 15 — before suffering a concussion and a neck injury in the second quarter of a June 21 road game versus the Ottawa Redblacks. Ottawa won, 40-17.

He then missed four full games, during which Brandon Bridge was 2-2 as the starter, before returning Aug. 2 in Edmonton against the Eskimos. Although the Roughriders lost 26-19 to Edmonton, Collaros enlivened the offence by throwing for 261 yards (four more than the Eskimos’ star pivot, Mike Reilly).

The Roughriders proceeded to win Collaros’ next two starts, knocking off the previously unbeaten Calgary Stampeders 40-27 on Aug. 19 before downing the B.C. Lions 24-21 in Vancouver six days later.

"He was our starter for a reason coming out of camp," Jones said. “Having him back has been very big for our football team.”

Next up is a very big game against Winnipeg, which has lost two in a row.

Also of note is the traditional Labour Day weekend matchup with Winnipeg — the 54th such game — and the accompanying hoopla involving Roughriders and Bombers fans.

"The fans appreciate that day and that game and the importance of it," said Collaros, who spent his first two seasons in the CFL with Toronto before spending four years with Hamilton.

"This is my first time going through it here in Saskatchewan. It has been pretty cool around town, running into people. Obviously, they're excited about the Riders all the time, but this weekend, especially.

Collaros was the victorious quarterback for Hamilton against Toronto on Labour Day weekend in 2014, 2015 and 2016. He threw four touchdown passes in each of the latter two games.

The winner of Sunday’s showdown will emerge with 12 points and move into a second-place tie — at least temporarily — with Edmonton in the West Division. Edmonton carries a 6-4 slate into Monday’s road game against Calgary (8-1).

Although things are trending well for the Roughriders, Jones cautions against reading too much into the team’s recent surge.

"We have not arrived," he said. "Don't anoint us the Grey Cup champions. We've got a lot of work to do. We're at the midway point and we're one game over .500. We’ve got a tough stretch the next half of the year.”

WHAT A RUSH: Stopping Bombers running back Andrew Harris will be a priority for Saskatchewan. Harris has a league-high 805 rushing yards after 10 games. A multi-purpose threat, he also has 40 catches for 311 yards. He has scored nine touchdowns, including seven on the ground.

FEELING BLUE: The Blue Bombers have lost 12 of the past 13 Labour Day Classics against Saskatchewan. The one exception in that span was in 2016, when Winnipeg won 28-25, courtesy of a last-play, 43-yard field goal by Justin Medlock.

DEFENSIVE DUDS: Winnipeg has allowed 39 and 44 points in its past two games. Over the previous eight contests, the Bombers had allowed an average of 21.3 points per game.

MAJOR DROUGHT: A Saskatchewan wide receiver has yet to score a touchdown this season. The Roughriders have a league-low six touchdown passes. Winnipeg’s backup quarterback, Chris Streveler, has one more TD toss than the entire Roughriders team.

SACK SPECIALIST: Saskatchewan’s Charleston Hughes, 34, has a league-high 12 quarterback sacks — seven more than anyone else in the league. He had a league-best 11 sacks all of last season, his 10th with the Calgary Stampeders.