TORONTO — The Dallas Stars are a team built to play with a lead. And when they get one early, more often than not it's going to be a long night. The Maple Leafs experienced that first-hand Thursday.
Feb 13, 2020 8:47 PM By: Canadian Press 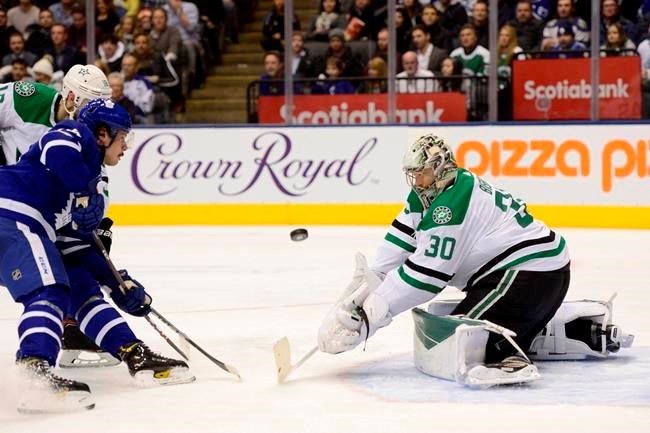 TORONTO — The Dallas Stars are a team built to play with a lead. And when they get one early, more often than not it's going to be a long night.

Tyler Seguin snapped a 17-game goal drought and Ben Bishop made 29 saves as Dallas scored on the first shot of every period in grinding out a 3-2 win over Toronto.

The Leafs picked up a 5-3 victory in Texas back on Jan. 29 — a contest where the visitors jumped ahead, forcing the Stars to take chances that in turn led to opportunities at the other end.

"You're playing against a team that knows how to make it hard on you defensively," Leafs head coach Sheldon Keefe said. "You can't spot them a lead just because you make it even harder. That's a real tough team to play against when you're chasing a game."

Despite the loss, Toronto remains third in the Atlantic Division, two points up on Florida after the Panthers fell 6-2 at home to the Philadelphia Flyers. Florida has one valuable game in hand on the Leafs.

Good news on the out-of-town scoreboard aside, Toronto's talent-loaded roster knows it must do better against defensively-sound teams like the Stars down the stretch as the margin for error tightens.

"We've got to stick with it and eventually we'll break through."

Denis Gurianov and Radek Faksa also scored for Dallas (33-19-5), which won its third in a row.

Auston Matthews, with his 41st goal of the season to move back into a tie for the NHL lead, and Zach Hyman replied for Toronto (30-20-8). Frederik Andersen, back after missing four games with a neck injury, stopped 16 shots as the Leafs dropped to 2-3-1 over their last six.

"They just play a really structured game," Matthews said of the Stars. "They don't really give you much."

Dallas led 2-1 through 40 minutes and went ahead by two after Leafs captain John Tavares went off for tripping early in the third. Making his NHL debut with veteran forwards Alexander Radulov and Joe Pavelski out injured, Stars rookie Jason Robertson's initial shot popped over to Seguin, who buried his 12th of the campaign in the arena where he used to watch games as a kid.

Andersen stopped Gurianov on a breakaway midway through the third to keep Toronto within striking distance before Bishop robbed William Nylander at the other end.

Hyman made it 3-2 with his 17th on a rebound with 1:19 left on the clock and Andersen on the bench for an extra attack, but that's as close as the Leafs would get.

"Not the prettiest of games on our end," Seguin said. "But we greased it out."

After giving up a goal on the game's opening shot, the Leafs fell behind 2-0 seconds after the first intermission when Faksa moved in alone on Andersen and slid his 10th through the five-hole.

With winger Andreas Johnsson out after hurting his right knee in the first, Keefe was forced to mix his lines and break up Matthews, Nylander and Mitch Marner — a super trio that accounts for nearly US$29.5 million in average annual value on the salary cap, but has now failed to record a point in four periods of action.

Keefe said after the game Johnsson's injury is "not short-term," meaning he'll likely be joining defencemen Morgan Rielly (foot) and Cody Cedi (ankle), and winger Ilya Mikheyev (wrist laceration) on the sidelines for the foreseeable future.

The fight was the fourth of the season for the Leafs, and the fourth overall for Clifford, who took his six-foot-seven, 255-pound opponent to the ice, much to the delight of the Scotiabank Arena crowd.

"It had a huge impact," Matthews said. "Got the crowd going, got the guys on the bench to wake up. That's when we got the momentum back on our side.

Matthews scored his 41st to tie Boston's David Pastrnak at 11:21 on the power play when he wheeled off the boards and snapped a shot past Bishop's blocker to make it 2-1.

Third in the Central Division, the Stars jumped out to a 1-0 lead 1:20 into the game when Gurianov took advantage of a turnover and fooled Andersen through the pads for his 17th.

Toronto didn't force a save out of Bishop until after the 10-minute mark against the bigger, more physical Stars as the home side, which was outshot 6-3 and outhit 15-3, failed to generate much of anything in the opening 20 minutes.

"They're very well-structured and don't mind if it's a sleepy type of night," Tavares said. "We tried to stay with it. Unfortunately, we weren't able to get it done."

Notes: Stars centre Andrew Cogliano, a product of the Toronto suburb of Woodbridge, played the 1,000th game of his NHL career. ... Dallas defenceman Roman Polak, who played parts of four seasons in Toronto, suited up for his 800th game.

This report by The Canadian Press was first published Feb. 13, 2020.

Cavalry FC ties Forge FC on stoppage-time penalty in CPL's Island Games opener
Aug 13, 2020 8:27 PM
Comments
We welcome your feedback and encourage you to share your thoughts. We ask that you be respectful of others and their points of view, refrain from personal attacks and stay on topic. To learn about our commenting policies and how we moderate, please read our Community Guidelines.