CALGARY — The commissioner of the Canadian Football League says his organization still has a lot of work to do in stopping gender-based violence.
Nov 19, 2019 9:56 AM By: Canadian Press 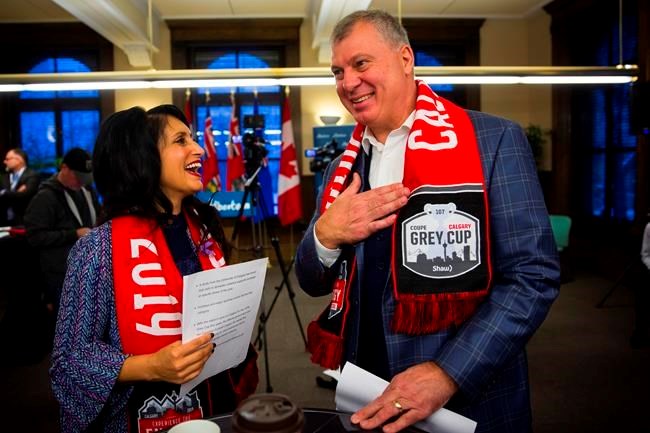 CALGARY — The commissioner of the Canadian Football League says his organization still has a lot of work to do in stopping gender-based violence.

The Winnipeg Blue Bombers square off against the Hamilton Tiger-Cats in Sunday's game at McMahon Stadium.

The CFL put in place a violence against women policy in 2015 that includes mandatory annual training and sanctions if there is a clear and documented case of assault.

Depending on the severity and number of incidents, the sanctions could range from a single-day suspension to a lifetime ban from the CFL.

Ambrosie says there is still a lot to learn and he would like to see more players and coaches out in the community talking about the issue.

"We've been called leaders on this issue, and yet I would say we wake up every day with a sense of humility, that we don't feel that we've got it all right and there's still more work to be done," he said.

There have been several high-profile domestic abuse cases in recent years involving professional football players in Canada and the United States.

"We've got a lot of young men who play this great game and we want to make sure that when we are confronted with the issue that we have an understanding of what the answers are, what the next steps are," said Ambrosie.

"There was a realization that from time to time something was going to happen and how were we going to deal with it? If we didn't have a policy in place, then you were lost. That was, I think, the very beginning."

One of the most high-profile players to play in the CFL with an association with domestic abuse was former Ticats/Montreal Alouettes quarterback Johnny Manziel.

In April 2016 a former girlfriend accused him of assault, and the misdemeanour assault charge was dropped after Manziel attended an anger management course, a domestic violence victim panel and substance abuse program.

The CFL was willing to approve a 2018 contract for Manziel provided one was negotiated and he continued to meet conditions set by the league.

Manziel did eventually sign with the Ticats in 2018 before being traded to Montreal.

The league said Manziel had contravened an agreement that made the Texan eligible to play in the CFL.

This report by The Canadian Press was first published Nov. 19, 2019.

NHL/NHLPA announce tentative agreements on return-to-play protocol, new CBA
Jul 6, 2020 5:32 PM
Comments
We welcome your feedback and encourage you to share your thoughts. We ask that you be respectful of others and their points of view, refrain from personal attacks and stay on topic. To learn about our commenting policies and how we moderate, please read our Community Guidelines.