SEATTLE — A look at Sunday's MLS Cup final between Toronto FC and the Seattle Sounders: WHERE: CenturyLink Field. WHEN: 3 p.m. ET. ATTENDANCE: Game is a sellout, with more than 69,000 expected. REFEREE: Allen Chapman.
0
Nov 8, 2019 6:25 AM By: Canadian Press 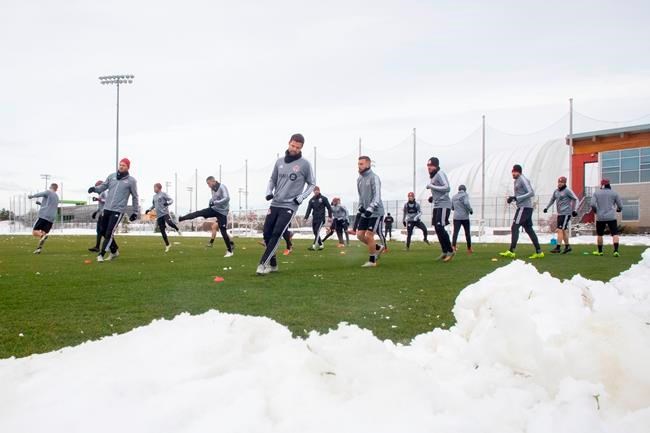 SEATTLE — A look at Sunday's MLS Cup final between Toronto FC and the Seattle Sounders:

ATTENDANCE: Game is a sellout, with more than 69,000 expected.

REFEREE: Allen Chapman. He was also in charge of the 2017 final in Toronto.

ALL-TIME MEETINGS: The Sounders have a 9-3-2 edge in the regular-season series (including 5-2-1 in Seattle). The teams have split their playoff encounters, both in championship games, with Seattle winning in 2016 via penalty shootout after a 0-0 tie and Toronto winning the 2017 final 2-0. Both finals were in Toronto.

FORM: Toronto has won four straight and is undefeated in its last 13 regular-season and playoff games (7-0-6). TFC's last league loss was a 2-0 defeat Aug. 3 at the New York Red Bulls. Seattle has won five straight and has lost just twice in it last 12 league matches (8-2-2) since mid-August.

STILL TO COME: A Seattle goal in open play in the final.

QUESTION-MARKS: Toronto striker Jozy Altidore has not played since the Oct. 6 regular-season finale because of a quad strain and his recent updates have been very bleak. Toronto coach Greg Vanney has to choose between Laurent Ciman and Omar Gonzalez at centre back. Gonzalez was the starter but missed time with a hamstring issue and Ciman has looked good filling in for him.

SOUNDERS TO WATCH: Uruguayan midfielder Nicolas Lodeiro is the straw that stirs the Sounders drink, moving around the field looking to create. Peruvian Raul Ruidiaz is the danger man up front. "He's really relentless in the way he plays off the ball and it's really a joy to watch," said Seattle midfielder Cristian Roldan. Former TFC 'keeper Stefan Frei broke Toronto hearts in 2016 with a highlight-reel save off Altidore in the championship game.

TFC PLAYERS TO WATCH: Spanish playmaker Alejandro Pozuelo figures to play farther forward again in Altidore's likely continued absence. Watch his movement, as he drags defenders away from where they want to be while opening up space for teammates. Goalkeeper Quentin Westberg has come up big this season, making big saves including penalties. His ball distribution is among the best in the league among 'keepers. Midfielder Nick DeLeon and fullback Richie Laryea have been Toronto's super-subs in the playoffs.

This report by The Canadian Press was first published Nov. 8, 2019.

Raptors' Ujiri says conversations about racism can no longer be avoided
May 31, 2020 7:54 PM

MLS players agree to concessions to return to action at Orlando tournament
May 31, 2020 7:39 PM

Toronto FC takes next step, starts small group training sessions on Monday
May 31, 2020 4:03 PM
Comments
We welcome your feedback and encourage you to share your thoughts. We ask that you be respectful of others and their points of view, refrain from personal attacks and stay on topic. To learn about our commenting policies and how we moderate, please read our Community Guidelines.