Canada will be counting on Alexis Lafreniere for offence at the upcoming world junior hockey championship. And with the status of some of the other veterans from last year's team up in the air, add leadership to his to-do list. The presumptive No.
0
Dec 2, 2019 6:17 PM By: Canadian Press 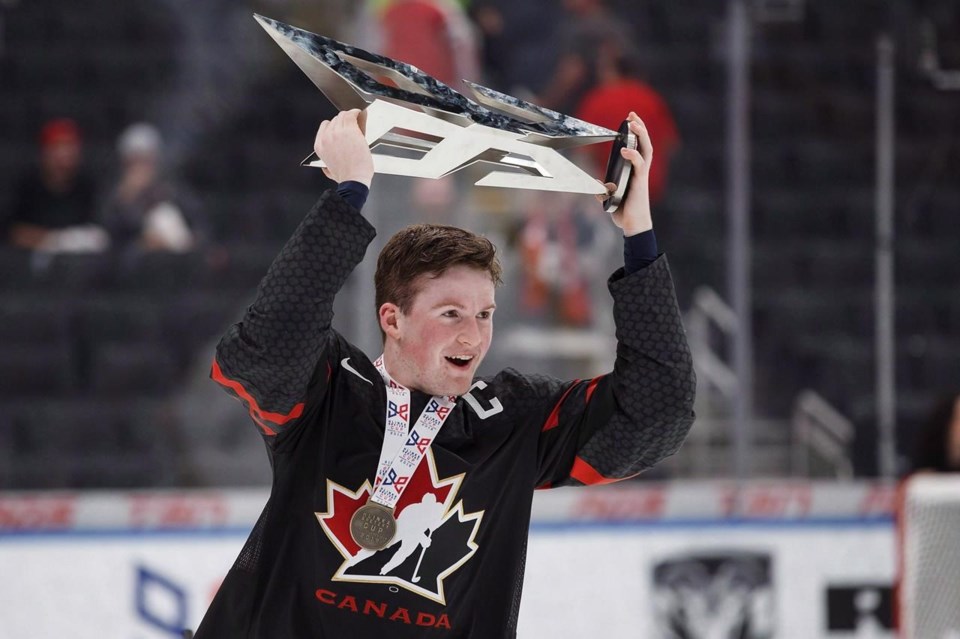 Canada will be counting on Alexis Lafreniere for offence at the upcoming world junior hockey championship.

And with the status of some of the other veterans from last year's team up in the air, add leadership to his to-do list.

The presumptive No. 1 pick at the 2020 NHL draft, Lafreniere was one of 31 players named to the country's selection camp Monday.

The 18-year-old winger is joined by defencemen Jared McIsaac and Ty Smith, who were also part of the roster that finished a disappointing sixth in Vancouver in Victoria some 11 months ago.

McIsaac, however, has played just one game this season following shoulder surgery, while a trio of 19 year olds from the 2019 squad — centres Joe Veleno and Barrett Hayton, and defenceman Noah Dobson — are playing professionally and might not be available for the tournament that begins Dec. 26 in the Czech Republic.

Hockey Canada's head scout, Brad McEwen, said last year's experience for Lafreniere, who had one goal in five games as the youngest player on the team, should serve both himself and the program well.

"Until you live it, it's sometimes hard to put it in words or explain what it's all about," McEwen said on a conference call. "His experience last year and the role he played will only make him stronger going forward. He's going to be a real good, positive guy for our team."

Lafreniere leads the Canadian Hockey League with 59 points (17 goals, 42 assists) in 28 games for the QMJHL's Rimouski Oceanic this season.

"I like our group that were a part of it last year," added Mark Hunter, who is part of Canada's brain trust for the 2020 event. "Good or bad, it's an experience that they see, the pressure of how to play in certain situations.

"It's only going to help our group to be able to show (the new players) how to play under pressure and how we, as a group, push together."

Four goaltenders, 10 defencemen and 17 forwards will battle for spots on Canada's roster at the selection camp, which runs Dec. 9 to 12 in Oakville, Ont.

Veleno, who is property of the Detroit Red Wings and currently in the American Hockey League, seems like the most likely of the players eligible to be released to the Canadian team.

Hayton has suited up for 14 games with the Arizona Coyotes this season, while Dobson has played seven times for the New York Islanders. Kirby Dach, 18, was expected to be available, but the No. 3 pick at the 2019 draft has five goals and 10 points in 20 games for the Chicago Blackhawks.

A trio of 17 year olds were named to Monday's list of 31, including Quinton Byfield, who's also expected to go high at next June's NHL draft, fellow centre Cole Perfetti and defenceman Jamie Drysdale.

"We felt strongly that they were the best players," McEwen said. "(Regardless) of age, they've been good, productive players."

A six-foot-four, 215-pound member of the OHL's Sudbury Wolves, Byfield has 20 goals and 50 points in 28 games this season, and likely has the best shot at making the team.

"He's a big body that possesses the puck," McEwen said. "He brings some real qualities with the overall package and skill."

"We want a big power forward that can do things at high speeds and drive to the net," he said. "We need some bigger bodies that can play heavy with top-end skill.

"I want to see him use his feet, strength and skill to do some things that some other smaller skilled players can't do."

The crop of defencemen set to compete for roster spots is led by the smooth-skating Bowen Byram, who was picked one spot after Dach by the Colorado Avalanche in June.

Hunter said puck possession will be key on the bigger ice surfaces in the cities of Ostrava and Trinec — which sit roughly 400 kilometres east of Prague — when Canada's tournament starts Boxing Day against the United States.

"We can't just throw the puck blindly," Hunter said. "We really believe we've got good skaters out here that can skate at high speeds and different ways and stop on a dime."

Only two of the five goalies invited to the World Junior Summer Showcase in suburban Detroit four months ago — Olivier Rodrigue and Hunter Jones — made the cut, with Nico Daws and Joel Hofer getting the call over Colten Ellis, Zachary Emond and Alexis Gravel

Size is clearly a factor in the crease for Canada.

Rodrigue, who appears to be the front-runner, stands six foot one, but Daws is six foot four, while both Jones and Hofer both come in at six foot five.

"Our goaltending people from Hockey Canada stamped all four, liked all four, wanted all four," Hunter said. "It's going to be very competitive."

This report by The Canadian Press was first published Dec. 2, 2019.

Hulking lineman Derek Dennis has experienced racism while playing in Canada
Jun 3, 2020 2:46 PM
Comments
We welcome your feedback and encourage you to share your thoughts. We ask that you be respectful of others and their points of view, refrain from personal attacks and stay on topic. To learn about our commenting policies and how we moderate, please read our Community Guidelines.