TORONTO — T.J. Zeuch's opening pitch in his first big-league start was one he'd like to have back. The Toronto right-hander will still have fond memories of the game's end result.
0
Sep 10, 2019 9:09 PM By: Canadian Press 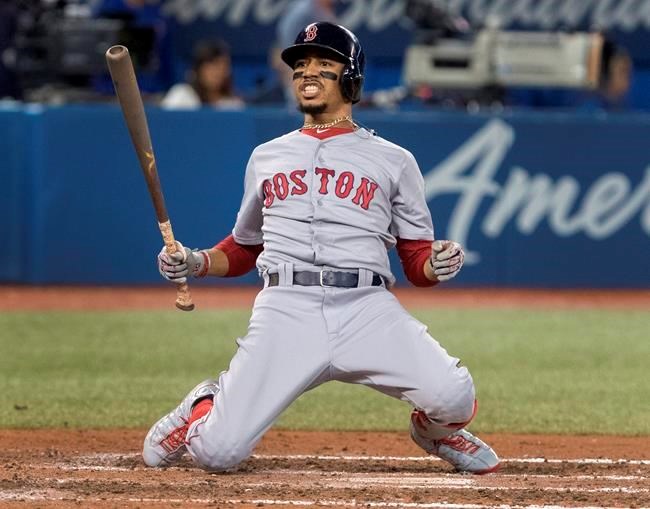 TORONTO — T.J. Zeuch's opening pitch in his first big-league start was one he'd like to have back.

The Toronto right-hander will still have fond memories of the game's end result.

Zeuch refocused after Boston's Mookie Betts homered on the first pitch and his Blue Jays teammates picked him up with three home runs in a 4-3 win over the Red Sox on Tuesday night at Rogers Centre.

"Facing that lineup, he did a good job," said Toronto manager Charlie Montoyo. "I know he feels good about it."

"We didn't keep the ball in the ballpark," said Boston manager Alex Cora. "When you don't do that, you pay the price at this level."

Zeuch did well to keep his composure after Betts launched the ball off the foul screen in left field. It was his 28th homer of the year.

The Red Sox scorched a few more pitches in the opening frame off the 2016 first-round pick. Zeuch gave up a pair of singles before retiring the side.

He worked 4 1/3 innings, giving up six hits, three earned runs, three walks while striking out one.

Reliever Justin Shafer (2-1) worked 1 1/3 innings for the win in the opener of a six-game homestand. Ken Giles closed things out in the ninth for his 19th save.

Biggio tied the game in the third inning by turning on a 1-2 offering from Boston starter Nathan Eovaldi for his 13th homer of the year. McGuire went deep in the fourth for his fifth homer of the season.

The Red Sox chased Zeuch in the fifth after doubles by Rafael Devers and J.D. Martinez. Reliever Buddy Boshers gave up a two-out single to Andrew Benintendi that scored Martinez to put Boston up 3-2.

His replacement, Josh Taylor (1-2), was greeted with Tellez's 18th homer of the year. Biggio also came across after reaching on a leadoff walk.

"I'm just getting to pitches that I need to get to," Tellez said. "I'm not trying to do too much. Sometimes in situations when I was younger, I was trying to hit balls a country mile when all you need to do is hit it right over the wall."

The announced crowd of 17,819 stirred when the Blue Jays loaded the bases in the sixth for Vladimir Guerrero, Jr. However, Boston reliever Ryan Brasier handcuffed the young slugger, who grounded into a force to end the inning.

The Toronto bullpen didn't give up an earned run. Boshers and Shafer were followed by Derek Law, Tim Mayza, Jordan Romano and Giles.

Boston put two runners on in the ninth before Giles got Devers to fly out to end the game, which took three hours 37 minutes to play.

Notes: Zeuch was Toronto's 20th different starting pitcher this season. That moved the Blue Jays into a tie for second-most in MLB history, trailing only the 1915 Philadelphia Athletics (24 starters). ... Toronto's Trent Thornton (4-9, 5.23 earned-run average) was scheduled to start Wednesday night against fellow right-hander Jhoulys Chacin (3-10, 5.66). ... Zeuch allowed two runs on three hits in his only other appearance, a four-inning relief stint against Atlanta on Sept. 3.

Sonny Bill Williams a spectator as Wolfpack win pre-season game Sunday
Jan 19, 2020 7:56 AM
Former 1,500-metre specialist Elmore Tokyo-bound after breaking marathon mark
Jan 19, 2020 7:48 AM
Canucks use 4-1 win over Sharks to move into first place in Pacific Division
Jan 18, 2020 11:53 PM
Comments
We welcome your feedback and encourage you to share your thoughts on this story. We ask that you be respectful of others and their points of view, refrain from personal attacks and stay on topic. To learn about our commenting policies and how we moderate, please read our Community Guidelines.