DUNEDIN, Fla. — Blue Jays baseball has become synonymous with Dunedin in the decades since the team set up its spring training camp there in 1977.
0
Feb 25, 2019 7:00 AM By: Canadian Press 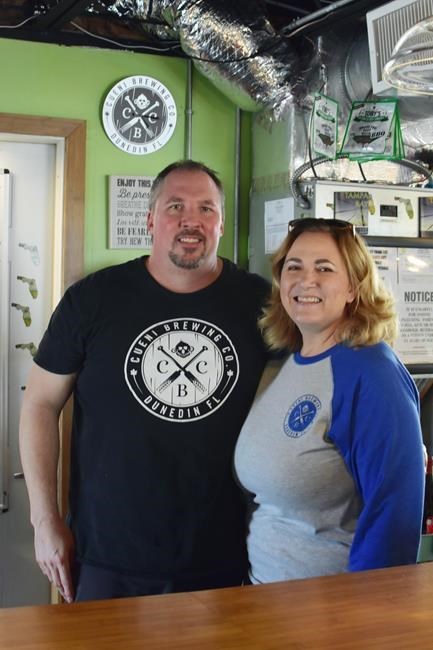 DUNEDIN, Fla. — Blue Jays baseball has become synonymous with Dunedin in the decades since the team set up its spring training camp there in 1977.

But there's another B word that's entrenched itself in the culture of the Florida city over the last few years — beer.

Dunedin, which has a population of roughly 36,000, boasts seven craft breweries in a 1.5-kilometre radius in its downtown core, and they're all within a 20-minute walk to Dunedin Stadium, the spring training home of Toronto's MLB team.

"Having that many breweries within walking distance isn't common," said Jon Cueni, who owns Cueni Brewing Co. with his wife Bren. "We get a lot of what I call local tourists, people who live an hour away, two hours away, and they come here because they know they can walk to seven breweries in a day.

"Plus there's always something going on in Dunedin — arts festivals, baseball, lots of restaurants — so it's a great place to get away and grab a beer or two."

Cueni opened his brewery (which specializes in Belgian-style beer) in November 2017, leaving behind a career as a bathtub refinisher in Ohio and moving to Florida to pursue a microbrewing dream that began "reluctantly" as a hobby in his Columbus home when a friend encouraged him to try it.

"I was like: 'I can go to the store and buy whatever I want and I don't have to wait three weeks,' but I bought a small kit and (it grew) from there," he said. "Eventually I had an office at my house that had a little tiny desk and the rest of it was just chest freezers and grain."

The Cuenis settled on Dunedin for the site of their brewery — beating out Costa Rica, Georgia, North Carolina and South Carolina — after visiting the city in 2015.

They immediately appreciated Dunedin's walkability and its proximity to the Gulf of Mexico, and a coincidental encounter helped seal the deal, at least for Bren.

"The funny part of the story is we were looking for parking so we turned into a lot and it happened to be the First United Methodist Church. I happen to be Methodist so it was like 'oh, is this a sign?'" she said with a laugh. "Jon rolled his eyes, as he's wont to do when I say silly things like that, but here we are."

Dunedin is part of a larger beer culture that's thriving in the St. Petersburg/Clearwater area, home to the largest concentration of craft breweries in the state (41). The region's tourist department even set up a beer trail — the Gulp Coast — whereby patrons collect stamps on their "brewery passport" and earn prizes based on how many they visit.

"Think of it as the Sunshine State's answer to California's wine country," reads the description of the Gulp Coast on Visit St. Pete/Clearwater's website.

Dunedin arrived on the craft beer seen in 1996 when Michael and Candy Bryant opened Dunedin Brewery, the oldest operational microbrewery in Florida. Others have followed suit in the last decade — House of Beer in 2009, 7venth Sun in 2012, Woodwright and Cueni in 2016, and Soggy Bottom and Caledonia Brewing in 2017.

Caledonia, owned by locals Hollie Parker and her husband and the brother-sister duo of Dawn and Dave Dally, is located in a 95-year-old building that used to house the Dunedin Times newspaper.

The Parker-Dally foursome, like the Cuenis, also began as home brewers before setting up shop downtown, steps away from the hospital in which Dawn and Dave were born.

"Our best sellers are our IPAs and we're known for our Scotch ale," said Parker, adding that the brewery's name is a nod to Dunedin's Scottish roots. "We do mostly traditional styles ... and we use only natural ingredients, organic grains. You won't see any extracts or crazy candy beers here."

Though the concentration of breweries in the area is strikingly high, the owners of both Caledonia and Cueni don't consider themselves to be competing for business.

"We borrow grain from each other, wash each other's kegs," Parker said.

"We might be in competition with the big boys, but not with each other," added Dave. "There's a real camaraderie among the brewers."

Bren Cueni credited the Bryants at Dunedin Brewery for that co-operative attitude.

"They really believe in paying it forward so they've helped pretty much every brewery here," she said. "We all work together."

The Caledonia owners are self-professed baseball fans — Dave is a former NCAA Division 1 pitcher at Jacksonville University — and the brewery even changes its hours of operation during spring training to help accommodate the influx of visitors to the area.

"It's huge up here, just a great feeling when spring training is on," Parker said. "Now that we've been open for our second spring training, we're starting to see regulars coming back from last year so it's a great time for local businesses."

Bren Cueni, while not much of a sports fan, also welcomes the bump in patronage during the six-week MLB pre-season.

"I don't follow baseball that much, but you can definitely tell when spring training is happening," she said. "We start getting a lot of Canadians hanging around and that's awesome."

UFC boss says light-heavyweight champion Jon Jones will determine his own future
Jun 1, 2020 2:25 PM
Comments
We welcome your feedback and encourage you to share your thoughts. We ask that you be respectful of others and their points of view, refrain from personal attacks and stay on topic. To learn about our commenting policies and how we moderate, please read our Community Guidelines.