Toronto FC coach Greg Vanney steps down, says it's the right time to move on 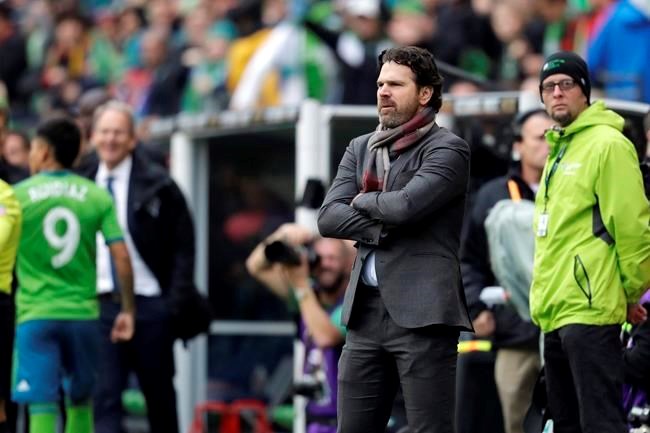 TORONTO — Greg Vanney says he was "handed the keys to what was a Ferrari in development" when he took over Toronto FC in August 2014.

In truth, then-Maple Leaf Sports and Entertainment boss Tim Leiweke and GM Tim Bezbatchenko led him to a car crash and told the first-time head coach to build something out of it.

Vanney was Toronto's ninth coach in eight years. At the time, TFC was a bumbling franchise that had never made the playoffs and had an all-time MLS record of 60-114-72. Barring the Canadian Championship, the only thing TFC had won was scorn.

He inherited a club that was 9-9-6 in the standings under fired coach Ryan Nelsen and had won just one of its six games and three of its last 13. Star striker Jermain Defoe, Mr. Bloody Big Deal, wanted out.

"I know we can get more out of this group of guys," said Bezbatchenko, who essentially engineered the firing of Nelsen by taking his complaints to the media and then watching the Kiwi coach snap back in public.

Hired by TFC in December 2013 as the club's assistant general manager and academy director, Vanney had been the coach in waiting.

Given the job, the welcome mat was hard to find.

"The first game that I walked out for Toronto FC as the coach I remember implicitly a fan behind me … yelled out 'Hey Vanney, I hope you're renting,'" he recalled Tuesday after announcing he was stepping down.

"That was, I think, the first voice I heard in my stretch as a coach at TFC. I remember thinking 'I am renting but I'm going to be renting for a long time.'"

Vanney finished out the season with a 2-6-2 record. Then the turnaround started.

Six years later, Toronto's trophy case contains everything there is to capture other than the CONCACAF Champions League spoils and Vanney took the team to a penalty shootout in the final of that competition.

Toronto has gone from the league's doormat to a model franchise, one that Vanney is now reluctantly leaving behind.

But the 46-year-old father of four is leaving on his own terms, albeit in the wake of a painful 1-0 loss to expansion Nashville SC in the first round of the playoffs after a difficult pandemic-rejigged 2020 season.

Vanney's departure was not expected, although delays in sorting out a new contract had raised questions. His current deal expires at the end of the 2020 season.

An emotional Vanney thanked his players, staff and TFC's ownership, saying it was the right time to move on.

"I'm a builder. I like to build things and I like projects and I like big things," he told reporters. "And this club is in a really really good place. There's not a lot of building to do. It is an incredible club that is positioned, from where we started to where we are, to be great."

He said his departure had nothing to do with money or other contract terms, calling it a "personal family decision." He praised the club for its patience "while I worked through this entire process."

Manning said talks dated back to May, with a particularly emotional session in July. While he said they "didn't want to push Greg or stress him," he acknowledged the team asked Vanney for an answer as the regular season came to an end.

After finally being able to spend some time with his family at home ahead of the playoffs, Vanney came to his decision, which was delivered Sunday.

"When he notified us, I was not totally taken by surprise," said Manning, who said one of his best decisions was not firing Vanney after becoming president in October 2015. "I respected him for the decision that he made.

"But it was sad in a way because we obviously have great respect for Greg and wanted him to continue here. But we now have to move forward."

Vanney said he had no immediate plan "other than to regroup, spend some time with the family and figure out what's next." But it doesn't sound like he will remain idle for long.

"I do need to catch my breath, I do need to regroup a bit. But anyone who knows me knows I don't sit still very well so it won't be a long thing. But at the same time, I do know that this has been an exhausting year emotionally."

There are openings, including the Los Angeles Galaxy.

The search is already on for his replacement with Manning saying MLS experience is not a requirement given his and Curtis' experience in the league.

"We're going to try to have the best coach possible, whether it's an international coach or it's a domestic-based coach," said Manning.

The hope is to hire somebody sooner than later, to have the new coach involved in personnel decisions. Finding a new designated player, an attacking player who can generate goals, is top of the list

As a coach, Vanney's trademark was his preparation, commitment and even hand. His teams were able to shift on the fly and he was able, at least on the surface, to manage the many egos that make up a pro soccer team.

He put in long hours, somehow finding time to check up the academy where his twin boys played — his youngest boy was in the TFC Junior program. At home he was rarely away from a laptop, working on his own team or watching what others were doing.

Anything to get better.

"Thank you for the trust and support and being there with me every step of the way," Toronto captain Michael Bradley said in a social media post. "I'll miss you and your commitment and knowing that you were spending every waking moment trying to push us forward."

Vanney and his coaching staff go back decades. He played with Dan Calichman and Robin Fraser, now head coach at Colorado, with the Galaxy. Jim Liston, Toronto's director of sport science, was the strength and conditioning coach for the Galaxy during the 1999, 2001 and '02 Cup final run.

Chances are they will be reunited with Vanney at his next stop. The ripple effect of Vanney's departure will spread wide.

Together with front office help from Bezbatchenko, then Manning and Curtis, they have built an organization where winning and trophies are expected.

Away from the field, Vanney is courteous and decent with immense patience, although there were limits. Constant questions over Jozy Altidore's health in the run-up to the 2019 MLS Cup produced rare moments of testiness.

He leaves as the longest-tenured coach in TFC history, holding every coaching record, including games coached (250) and wins (112). He has a regular-season record of 87-68-48.

A finalist for coach of the year, Vanney led Toronto to the second-best regular-season record at 13-5-5 in a challenging 2020 campaign. Forced to play all but four games away from BMO Field because of travel restrictions caused by the pandemic, injury-plagued Toronto limped into the playoffs losing three of its last four games.

The post-season ended quickly in a 1-0 extra-time loss to Nashville.

He coached Toronto to the MLS Cup, Supporters’ Shield and Canadian Championship in 2017, becoming the first MLS club to win a domestic treble. He was named MLS and CONCACAF coach of the year that season.

Toronto qualified for the playoffs under Vanney five of the past six seasons and captured three Canadian championships since 2016.

"My objective when I arrived here … was to leave the club in a better place than I picked it up," he said.

This report by The Canadian Press was first published Dec. 1, 2020