TORONTO — The Wolfpack victory song rang out in the locker-room at Lamport Stadium, with likely more than a little relief in the rendition after a wobbly second half against the London Broncos.
Sep 1, 2018 1:41 PM By: Canadian Press 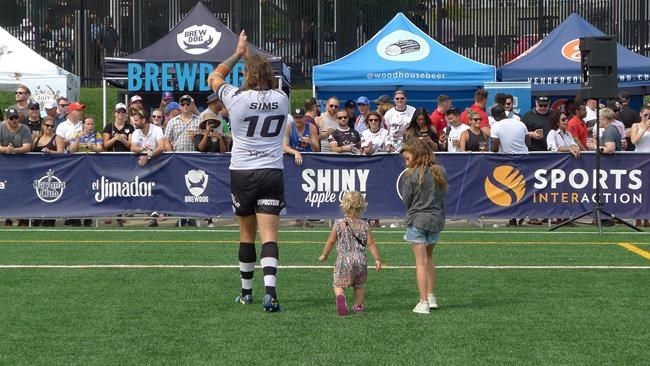 TORONTO — The Wolfpack victory song rang out in the locker-room at Lamport Stadium, with likely more than a little relief in the rendition after a wobbly second half against the London Broncos.

Toronto ran up a 32-0 lead Saturday before the Broncos answered with four unanswered tries in a furious 10 minutes midway through the second half, leaving an announced crowd of 7,557 holding its breath.

"It's about winning in this (Super 8s Qualifiers) competition," said Toronto assistant coach Simon Finnigan, who handled the post-match media duties for coach Paul Rowley. "It's not about winning pretty and all them type of things. It's about getting two points."

But he conceded that his team had taken its foot off the gas. Captain Josh McCrone also noted the heat of the 12:30 p.m. start, a concession to English TV.

Jets and other planes thundered above, before and during the playoff game as Toronto's annual air show held court up high. On the field, the Wolfpack held the upper hand until the visitors woke up three-quarters of the way into the game.

London coach Danny Ward said given its start, his team deserved no better. Asked if he took any consolation from the late comeback attempt, he replied: "No, not at all."

Toronto forward Richard Whiting showed his mettle after suffering a head gash on one of the opening plays. The cut was deemed too deep for a mere bandage so he had "eight to 10" staples inserted — "He looks better now," said McCrone — and returned to the field wearing a scrum cap.

He was feeling feisty enough to be sin-binned with a London player after a late-game melee.

The teams play each other once with the top three finishing securing Super League status. No. 4 plays No. 5 in what's dubbed the "Million Pound Game" to see who joins them.

After executing poorly in a 28-22 loss to Hull Kingston Rovers last time out, the Wolfpack offence was on cue early Saturday and made London pay for missed tackles as they ran up an 18-0 lead in just 19 minutes.

At the other end, the Toronto defence was rock-solid.

Down 20-0 at the half, London found itself in more trouble after a loose carry gifted McCrone a try one play after the kickoff. The visitors' woes continued 10 minutes later as Caton-Brown was allowed to touch down his own grubber kick without a single London player contesting.

London finally breached the Wolfpack defence with a try in the 59th and kept going, adding three more in the 63rd, 66th and 69th minutes to cut the lead to 32-22 as Toronto reeled. An O'Brien penalty staunched the bleeding in the 70th minute.

The Broncos administered one of Toronto's two regular-season defeats, beating the Wolfpack 47-16 in London on Feb. 25. Toronto avenged that loss on June 9, beating the visiting Broncos 32-12.

Toronto, which topped the Championship with a 20-2-1 regular-season record, opened the playoffs with a 14-0 win at Halifax before losing to Hull KR.

Toronto visits Salford next weekend, before hosting Toulouse and Widnes. The Wolfpack wrap up play at Leeds.