Two second half goals power Whitecaps to victory over Earthquakes 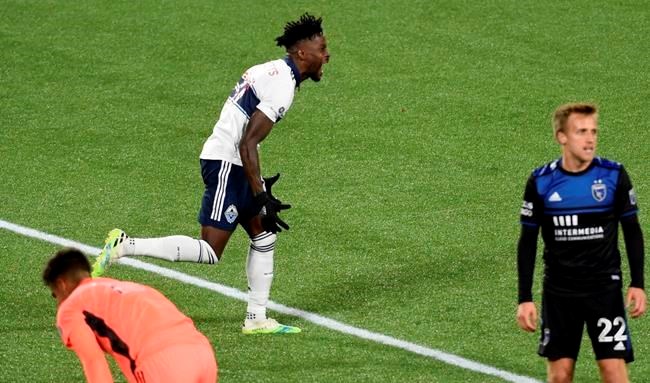 PORTLAND, Ore. — Ali Adnan and Tosaint Ricketts each scored a goal as the Vancouver Whitecaps defeated the San Jose Earthquakes 2-1 at Providence Park in Portland, Ore.

The Whitecaps hoped to remain in a playoff position in the Western Conference standings with a win. They entered the game in a three-way tie for the eighth and final playoff spot with Real Salt Lake and Houston. Vancouver's win now puts them level with San Jose on points as they both are tied for seventh place, but the 'Caps have two more victories than the 'Quakes.

The Whitecaps found themselves down 1-0 after a goal from Carlos Fierro in the 24th minute. Cristian Espinoza sped up the wing and launched the ball into the box. Fierro then volleyed the ball into the net and past 'keeper Evan Bush to open the scoring.

Vancouver entered halftime down one goal, but they responded with two of their own in the second half.

Ali Adnan equalized at the 51st minute of the game with a curling free kick from 32 yards away that beat 'Quakes goalkeeper James Marcinowski.

Vancouver would eventually take the lead thanks to Tosaint Ricketts later in the half. Cristian Dajome fired a shot on net that Marcinowski initially saved. But the ball was deflected towards Ricketts' foot. He then tapped it into the net to give the 'Caps a 2-1 lead.

The Whitecaps will be back in action Tuesday night against the Seattle Sounders in Portland.

This report by The Canadian Press was first published Oct. 24, 2020.