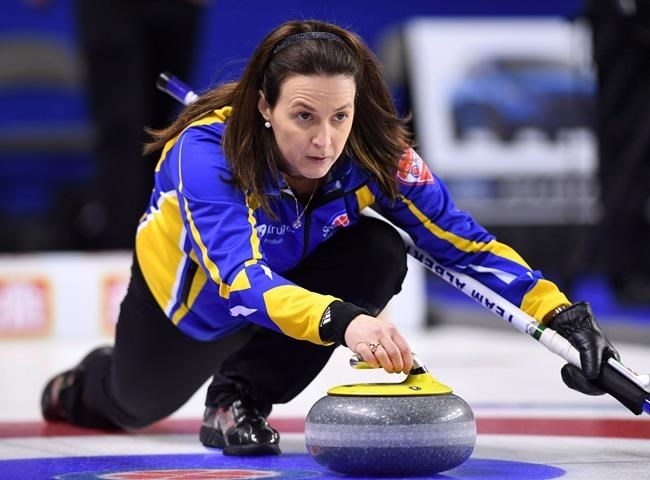 There's plenty to like about Heather Nedohin's curling resume. In bringing her on board as coach, Team Kerri Einarson is hoping her knowledge, drive and spirit will help them stay at the top.

"We wanted that strategic input," said team second Shannon Birchard. "And then we just know she's a very energetic person. Sometimes we know that we need to inject a little bit of that into our team.

"So I think that was a big asset when we were trying to find somebody for the team."

As reigning champions, Einarson, Birchard, vice Val Sweeting and lead Briane Meilleur will return to the 2021 Scotties as Team Canada. They also earned a coveted berth in the Olympic Trials next fall.

Ranked No. 1 in Canada and second in the world behind Sweden's Anna Hasselborg, the Einarson team is looking to build off its recent success and peak at the right time.

"The biggest thing is making sure that I am able to provide the additional growth that they need to develop and continue on their journey," Nedohin said Monday from Sherwood Park, Alta. "Like all of us, we're evaluating and continuing on.

"Our goal is obviously the upcoming Olympics and I look forward to being part of that."

Based in Gimli, Man., three of the four team members flew west last week to meet with Sweeting and Nedohin in Alberta for the first full-team on-ice training session of the season.

They're preparing for upcoming events in Okotoks, Alta., and Morris, Man., as part of an unusual schedule due to the COVID-19 pandemic. To help tune up, Team Einarson played friendly games against Team Rachel Homan, Team Kelsey Rocque and Team Karsten Sturmay, skipped by Geoff Walker.

Nedohin said she was impressed with Team Einarson's dynamics and work ethic.

"They're very diverse from the lead position right through to the skip," she said. "And they have a very entertaining gameset. They continue to push and elevate the standards of the women's game and it is entertaining.

"So to see them live, they're very consistent, they're very work-driven, and their communication is excellent. These are the type of assets of elite players."

Nedohin, 45, stepped away from competitive women's team play about five years ago. She has remained active in the game in a variety of ways.

"In your heart, whether you're a coach, manager or player, I believe that I can bring additional elements to the team to keep them on course to attain (their) goals," she said.

Einarson and her teammates all skipped different teams in 2017-18 before joining forces.

It was the first national women's title for Einarson, Sweeting and Meilleur.

Birchard also won a national title in 2018 as a substitute for Kaitlyn Lawes on the team skipped by Jones. Lawes was away at the time playing mixed doubles with John Morris at the Winter Olympics.

Team Einarson's chance to represent Canada at the 2020 world championship in Prince George, B.C., was dashed when the competition was cancelled on the eve of the event due to COVID-19 concerns.

"We want to get back there very badly," Birchard said. "I think it took us probably about a month or two to truly get over it in terms of the disappointment. Obviously we recognize that it was the right move to cancel it, and that was easy to recognize and easy to reconcile with.

"It was just obviously we had some hopes and dreams there that were a little bit crushed. So I think we just have to work really hard this season, try to string it all together again and try to replicate what we did last year at the Scotties, as long as there is a Scotties this (season.)"

Patti Wuthrich coached the team at the nationals last season. The 2021 Scotties were scheduled for Feb. 20-28 in Thunder Bay, Ont., but it remains unclear when or if that competition will be played.

Several top-flight events have been cancelled or postponed due to the pandemic. It's possible that a hub approach in a fan-less arena will be used for the Scotties and Tim Hortons Brier but Curling Canada has yet to announce its plans.

"We've got a plan (for our season) but it's always evolving and there's backups to backups, which I think is the right way to train this year," Nedohin said. "It's another element, (to) pivot dynamics-wise ... there's all these different adversities, which is a great way to train."

The team formally made the Nedohin coaching announcement on Sunday night via Twitter.

"There's been a lot of work in the background to determine if I was the right fit," Nedohin said. "After this weekend, I think we secured that I feel confident with being able to bring my (skills) to what I need to do for them and in return, I think they felt that I was a good fit."

This report by The Canadian Press was first published Oct. 26, 2020.