OTTAWA — Mike Babcock liked a lot of what he saw, but knows his team has a ways to go before the start of the regular season.
Sep 19, 2018 8:10 PM By: Canadian Press 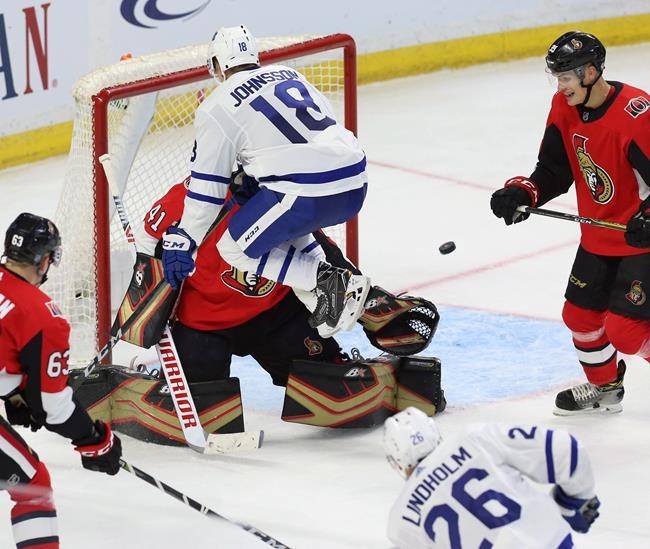 OTTAWA — Mike Babcock liked a lot of what he saw, but knows his team has a ways to go before the start of the regular season.

The Toronto Maple Leafs coach has reason to smile after Tyler Ennis scored twice to lead Toronto to a 4-1 victory over the Ottawa Senators to sweep their two-game pre-season series. The two teams played Tuesday night in Lucan, Ont., as part of Kraft Hockeyville Canada with Toronto taking a 4-1 victory.

"We got everyone doing all the right things and it gives us a place to build off of here (Thursday)," said Babcock. "A big part is getting some structure and work ethic back and you've got to get out there and you've got to play."

The Senators aren't worrying too much about the results at this point as Guy Boucher is more concerned with figuring out who can play at this level.

"These young guys are knocking at the door and the door's wide open right now so it's a good moment to look good," said Boucher.

Brady Tkachuk, the Senators first round pick, fourth overall, made his debut. The 19-year-old had his moments, but admitted the NHL speed was an adjustment.

"It was kind of an eye opener, it was a lot faster pace," said Tkachuk. "First real NHL game, it was good, but I've got to be a lot better.

"It was hard, it was a big adjustment, but I felt like I got better over the course of the game and I can be a lot better than what I showed (Wednesday)."

Tkachuk played with Chris Tierney and Mark Stone. Boucher said he will continue to give the young winger the opportunity to play with Stone.

Stone hadn't played since March 9, but is expected to play a big role both on and off the ice.

"It felt good," said Stone. "The timing was a bit off, I think that's to be expected when you haven't been on the ice or in a real game in seven months, but I felt good and can't wait to play a few more."

Filip Chlapik had a power-play goal for the Senators.

Goalie Craig Anderson played the first half of the game for Ottawa and allowed one goal on 18 shots before being replaced by Mike McKenna, who gave up two goals on nine shots.

Pre-season games rarely draw big crowds, but it was clear the majority of fans on hand were there to see the Leafs as blue jerseys dominated the crowd.

Matthews opened the scoring early in the second period as he was left all alone at the left post to score his first of the pre-season. Matthews looked solid playing with Patrick Marleau and Ennis.

"The second and third we kind of got a better feel for each other as the game went on," said Matthews. "It's always nice when you can capitalize on a couple chances like (Ennis) did there at the end. It helps building confidence moving forward here."

The Leafs took a 2-0 lead midway through the third as Calle Rosen made a great pass to Bracco who slipped through, as the Senators got caught on a bad line change, and beat McKenna.

Ottawa got on board with a power-play goal as Chlapik, who was one of the best Senators on this night, knocked down a puck in front and beat Pickard from in close, but a bad giveaway by Ben Harpur allowed Ennis to intercept and beat McKenna.

A scoreless first period saw both teams getting a feel for one another.

The Senators are back in action Friday as they host the Chicago Blackhawks, while Toronto will host the Buffalo Sabres Friday.