Punter Jon Ryan's time with the Buffalo Bills was short-lived. The 36-year-old Regina native joined the Bills after being released late last month by the Seattle Seahawks.
Sep 1, 2018 5:55 PM By: Canadian Press 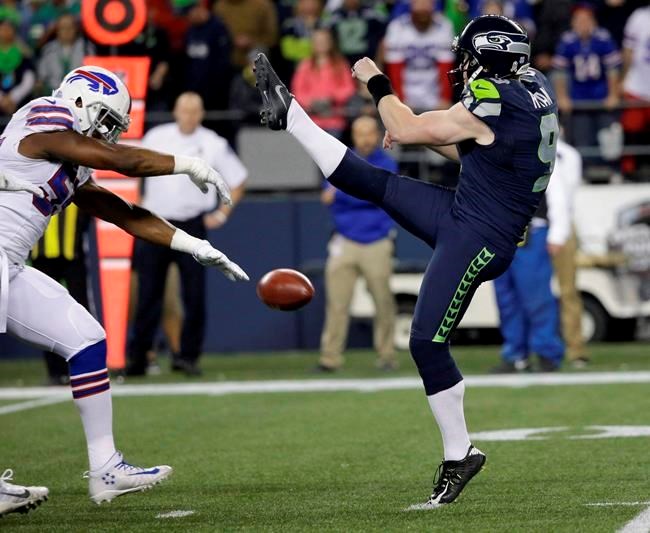 Punter Jon Ryan's time with the Buffalo Bills was short-lived.

The 36-year-old Regina native joined the Bills after being released late last month by the Seattle Seahawks. But on Saturday, Ryan was among Buffalo's final cuts as NFL teams trimmed their rosters to the 53-man limit.

Ryan won a Super Bowl and played in another NFL title game with Seattle. The Seahawks capped the '13 campaign beating Denver 43-8 in the Super Bowl, making Ryan the first player from Saskatchewan to capture the league championship.

Former Edmonton Eskimo Brandon Zylstra also made the cut with the Minnesota Vikings. Zylstra was the CFL's top receiver last season with 100 catches for 1,687 yards and five TDs en route to being named a league all-star.

Receiver Mark Chapman, taken first overall in this year's CFL draft by Hamilton, was released by the Denver Broncos. Receiver DeVier Posey, the Grey Cup MVP last season with the Toronto Argonauts, was among the Baltimore Ravens' final cuts.

Offensive tackle Austin Pasztor was released by the Atlanta Falcons after playing seven games for the squad last season. The six-foot-seven, 308-pound native of Langton, Ont., spent time previously with the Minnesota Vikings, Jacksonville Jaguars and Cleveland Browns and was the fourth player taken in the 2012 CFL draft by the Edmonton Eskimos.

And offensive lineman Dakoda Shepley of Windsor, Ont., the fifth player taken in the '17 CFL draft  by the Saskatchewan Roughriders, was released by the New York Jets on Friday. The former six-foot-five, 290-pound former UBC star had signed with the Jets as an undrafted free agent in April.

Canadians Ryan Hunter and Stefan Charles were both let go by the Kansas City Chiefs. Offensive lineman Hunter, a native of North Bay, Ont., was attempting to crack the Chiefs' lineup as an undrafted free agent while Charles, of Oshawa, Ont., joined Kansas City last season after time with the Tennessee Titans, Buffalo Bills, Detroit Lions and Jacksonville Jaguars.

Hunter was selected in the first round of the '18 CFL draft by the Toronto Argonauts while the Edmonton Eskimos took Charles in the second round of the '13 draft.

Offensive lineman Brett Boyko of Saskatoon reached an injury settlement with the Los Angeles Chargers. Boyko was entering his third season with the Chargers after joining the Philadelphia Eagles in 2015.

Last month, offensive lineman Geoff Gray of Winnipeg was released by the Cleveland Browns while tight end Adam Zaruba of North Vancouver, B.C., received an injury settlement from the Philadelphia Eagles. Zaruba, a Canadian rugby sevens team member, was attempting to crack the Eagles' roster for a second straight year.