Like his transatlantic rugby league team, Wolfpack co-owner David Argyle calls Toronto home but spends most of the year away.
Sep 27, 2018 8:32 AM By: Canadian Press 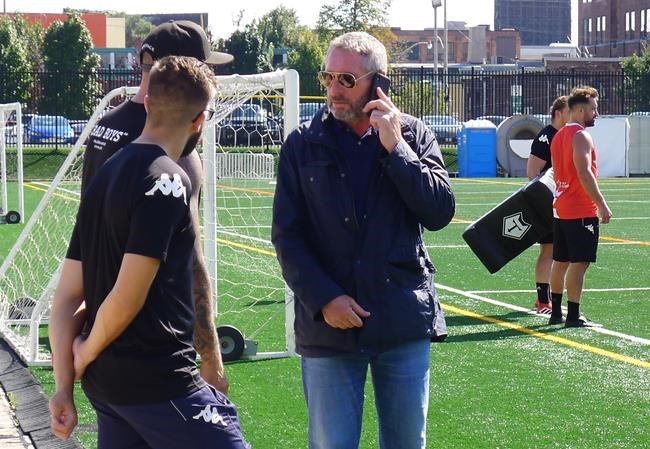 Like his transatlantic rugby league team, Wolfpack co-owner David Argyle calls Toronto home but spends most of the year away.

The 57-year-old Australian, who works in the mining, energy and agriculture sectors often in emerging markets, travels more than 200 days a year. But while passionate about raising the profile of the Wolfpack, Argyle is happy to stay in the background.

"As soon as the focus becomes on the owners, sports clubs can go sideways," Argyle said in a rare interview. "The focus should be on the team, the coaches, the fans, the sponsors, the broadcast distribution platform."

"So it's really the philosophy that (when) an owner has the attention drawn towards them then I think it's a distraction from where the real energy should be," he added.

While still a work in progress, the second-year Wolfpack are poised to make history. Having won promotion in 2017 out of the third-tier League 1, Toronto is on the verge of securing promotion to the top-flight Super League after topping the second-tier Betfred Championship during the regular season.

The Wolfpack, currently third in the playoff standings with a 4-2-0 record, wrap up Super 8s Qualifiers play on Friday at the first-place Leeds Rhinos (5-1-0).

The top three in the standings will secure automatic places in the Super League while No. 4 faces No. 5 in the so-called Million Pound Game on Oct. 7 to see who joins them.

A win in Leeds and Toronto is assured of at least a place in the Million Pound Game. A loss and the Wolfpack will need help from other teams to keep its promotion hopes alive.

Argyle was born in Merredin, a small town in Western Australia some 250 kilometres east of Perth.

His father worked for the World Bank, taking his family from Perth to Washington, D.C. in 1968, and travelled extensively around the world. Argyle recalls the family awaiting his return "with all sorts of wonderful stories and little artifacts."

Argyle returned to Australia to finish high school and got a degree in commerce from the University of Western Australia while working for natural resources company BHP. After spending two years in France crewing for a hot-air ballooning company that ran tours over wine country, he earned an MBA from the University of Michigan before returning Down Under to work for Newmont Mining, a company known as Newcrest.

He then set up his own firm to do advisory work for mining companies and spent almost four years living on Christmas Island, an Australian territory in the Indian Ocean, where he helped re-open a phosphates mine. From there it was on to China.

He first came to Toronto in 2005 or 2006 to attend the PDAC (Prospectors & Developers Association of Canada) Convention, falling in love with the city.

He travels extensively — one of his souvenirs from a recent visit to west Africa was a bout of malaria. "I'm on the road minimum 200 days a year, sometimes closer to 300 days a year."

Location doesn't seem to matter. He's working wherever he is. Run into Argyle and chances are he's on the phone — wearing a Wolfpack scarf — doing business.

Argyle grew up playing rugby union in Australia and continued playing the game while living in China, Australia, the U.S. and France.

He says he has rugby friends around the world as a result.

"Rugby is one of those very engaging, sticky sports where you play it once and you're part of that group," he said.

A colleague brought the Wolfpack venture to his attention after receiving an investment proposal from a university friend. That turned out to be Joe Santos, who went on to become COO of the Wolfpack.

Argyle met Santos, was impressed by what he heard and then connected with team founder Eric Perez, a Torontonian with a dream to bring rugby league to his hometown. Argyle signed on as an owner, with Paul Rowley and Brian Noble brought on board as head coach and director of rugby, respectively.

Perez, who was front and centre at the team's debut news conference in April 2016, remains a director and co-owner but is no longer visible when it comes to team matters. Santos is also a co-owner and runs Craft Guys, a craft brewing agency which helps stage home games.

Argyle says the ownership group numbers 11 or 12 with him being the only non-Canadian. They meet once a year and let the management group run the team.

Getting the Wolfpack into Super League is only part of Argyle's plan. He wants to create a global sports platform for the sport with Toronto as the centre, bringing other events to town.

The team, which currently pays for TV production of home games, says it already reaches 115 million homes around the globe through its broadcast partners.

And what is good for the Wolfpack is good for Toronto and its surrounding attractions, Argyle argues.

Argyle says the Wolfpack attracted a little more than 1,000 British visitors to Toronto last season and an estimated 3,000 this year. Next year, if in Super League, they hope to attract 15,000 tourists to their home games.

Argyle says the team projects an increase of U.K. arrivals at Toronto Pearson International Airport by "just north of 14 per cent ... It will increase hotel occupancy in Toronto by "just shy of two per cent."

The franchise is also bidding to host a Tier 1 international match here — possibly at BMO Field — which could bring another 10,000 visiting fans.

"Now we're giving them a real reason to come see this province, this country," Argyle said. "And a lot of them have relatives they haven't seen in decades. Now they have a reason to come and reunite."

"And most importantly people will have a new destination to come for summer," he added. "And then they get to enjoy what I believe is the greatest city in the world. I've had the pleasure of living in a lot of places. Toronto is the best city in the world without a doubt, because of the people, the interest — everything is just fantastic. Especially in summer."

While Argyle stays in the background, he has won praise from visiting fans for being a being a gracious host who has been happy to socialize and talk up Toronto.

The Wolfpack are clearly a labour of love for Argyle.

"It was almost like a vortex," he said. "The toe went in and before you knew it you 're completely absorbed into it. At times things are difficult, trying to manage the organization but we're very fortunate that we've got really good people in the front office and the playing squad. Brian and Paul do just a wonderful job of managing that side."

The team has somehow managed to turn 9,600-capacity Lamport Stadium into a fun place, with its craft beer and other food and drink stalls at both ends.

Raptors' first practice in four months had a "first day of school" feeling
Jul 11, 2020 2:46 PM
Comments
We welcome your feedback and encourage you to share your thoughts. We ask that you be respectful of others and their points of view, refrain from personal attacks and stay on topic. To learn about our commenting policies and how we moderate, please read our Community Guidelines.