The Prince George Conservatory of Music is teaming up with Dave Godber’s hand-tool woodshop, to raise money for new supplies 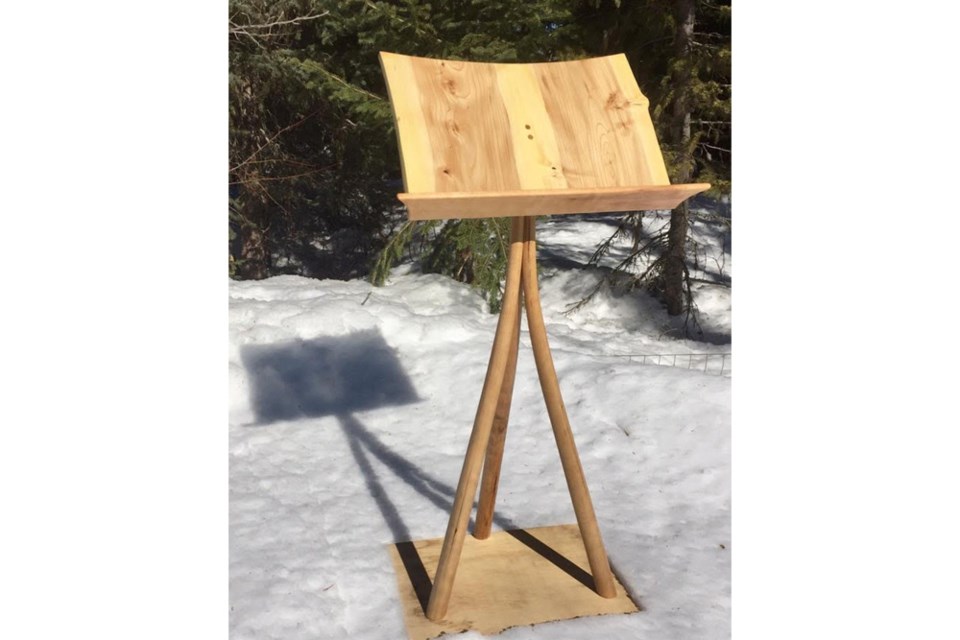 The man behind SilverTree Woodworking instinctively knows the answer: there’s a deep and abiding value in the art of creation.

This fall, the Prince George Conservatory of Music is teaming up with Dave Godber’s off-the-grid, hand-tool woodshop to raise money to buy new music stands and teaching support materials.

Godber is crafting a gorgeous music stand featuring a trio of steam-bent, hand-shaped legs topped with a generous table with wood from a 70-year-old ash tree that formerly graced the grounds of Prince George’s city hall. It will be unveiled at the Prince George Symphony Orchestra’s Pops in the Park concert on September 8 and raffle tickets will be on sale throughout the fall season. The lucky winner of the music stand will be chosen in a draw at the Christmas concert on December 13.

“The design is an elegant and fitting counterpoint to the music it was created for,” says Godber, who has a deep affinity with the Conservatory. Like the children who are introduced to the joy of playing music in the Conservatory’s various programs today, he cherishes his own childhood music lessons. His love of music was rekindled when he got involved with the Conservatory’s all-ages, mixed-level orchestra program called the Nechako Orchestra, now entering its fourth season.

“Group options such as the Nechako Orchestra are a great way to meet people and have fun with music,” says artistic director Allison Bell.

The orchestra is just one of the opportunities the Conservatory provides to bring the magic of making music to people of all ages, from toddlers to seniors, and skill levels. There are, of course, private instructions available in piano, strings, voice, composition and flute as well as several opportunities to perform with others.

“Younger children can get a great start in music with our expanding Music for Young Children program, while more advanced musicians can find small group options in their specific instrumentation, as well as theory groups, a group for children with developmental differences and a non-performance Joy of Singing program for adults,” says Bell.

To help make sure its programs are affordable for as many students as possible, the Conservatory turns to fundraising events such as the music stand raffle to raise money. All proceeds from the raffle will be donated to the Conservatory to aid its mission of spreading music in the Prince George area.

To find out more about the Conservatory and its various programs go to www.pgconservatory.ca or become one of its Facebook friends. You can see more of Godber’s ability to hit all the right notes in his work at www.silvertreewoodworking.ca.