DECATUR, Tenn. — Federal and state authorities on Wednesday investigated a crash between a school bus carrying 24 children and a utility vehicle that killed the bus driver and a 7-year-old girl in eastern Tennessee.
Oct 28, 2020 3:38 PM By: Canadian Press 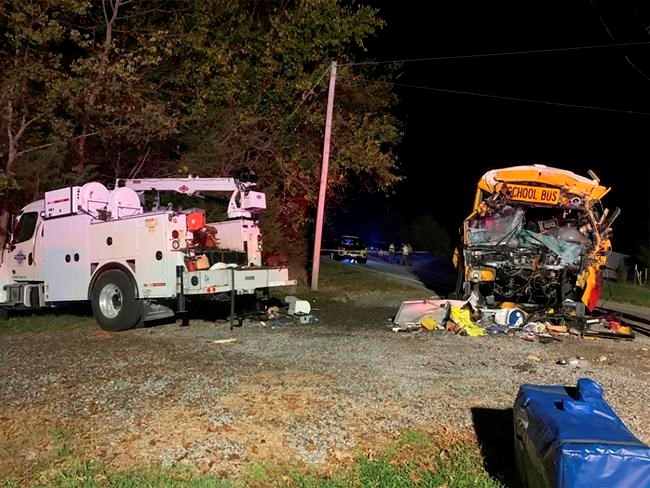 DECATUR, Tenn. — Federal and state authorities on Wednesday investigated a crash between a school bus carrying 24 children and a utility vehicle that killed the bus driver and a 7-year-old girl in eastern Tennessee.

Eight other children were injured when the utility vehicle and the bus collided on state Highway 58 in Meigs County on Tuesday afternoon, the Tennessee Highway Patrol said in a preliminary report.

The Service Electric utility vehicle was northbound when the driver, Terry Trammell, went off the side of the road, overcorrected, and lost control, sending his vehicle into the opposite lane and into the bus, the report said.

The bus driver, Lisa Dillard, 53, was killed, the highway patrol said. Dillard, of Birchwood, was wearing her seat belt.

Trammell, 56, of Grandview, suffered minor injuries in the crash. He also was wearing his seat belt, the report said.

The girl who was killed was not immediately identified by the highway patrol. No charges have been filed.

“Our school community lost a wonderful, dedicated employee and most importantly a friend to our schools and children,” Meigs County Director of Schools Clint Baker said at a news conference Wednesday. “We also lost a beautiful 7-year-old, little 7-year-old girl.”

The National Transportation Safety Board tweeted Wednesday that it has opened an investigation into the crash.

“We sincerely appreciate all of your thoughts, prayers and the outpouring of support that has been shown to Meigs County Schools and our community," Baker and the school board said in a statement. "Meigs County is a tight knit community and we know the bond will be important as we navigate the days ahead.”

M.J. Vaughn, 13, told WSMV-TV that he was on the bus and heard the vehicle’s brakes screech before the crash.

“All it was was just a big bang. Everybody was just screaming. There was people laying on the floor, glass everywhere," he said.

Tennessee Education Commissioner Penny Schwinn said in a statement that she and the entire staff at the Tennessee Department of Education are “deeply saddened.”

UN: Ethiopia's victory claim doesn't mean war is finished
Nov 29, 2020 7:53 AM
Plan to boost big Swiss firms' liability fails in referendum
Nov 29, 2020 7:21 AM
Comments
We welcome your feedback and encourage you to share your thoughts. We ask that you be respectful of others and their points of view, refrain from personal attacks and stay on topic. To learn about our commenting policies and how we moderate, please read our Community Guidelines.