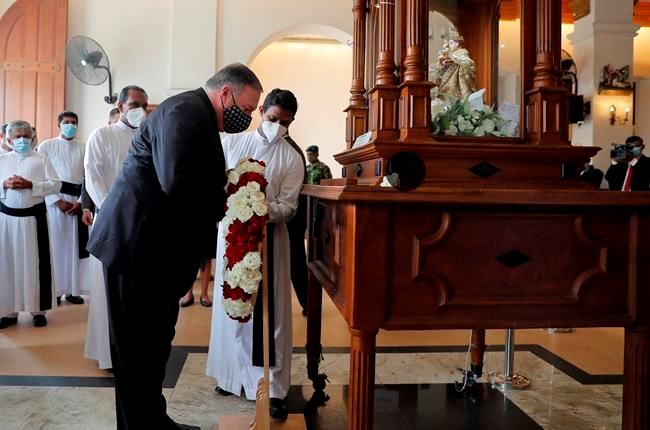 MALE, Maldives — U.S. Secretary of State Mike Pompeo on Wednesday brought the Trump administration’s anti-China campaign to two Indian Ocean island nations considered particularly at risk for what American officials allege is Chinese exploitation. In one significant step, Pompeo announced that the United States would for the first time open an embassy in the Maldives.

Pompeo visited Sri Lanka and the Maldives to press the two countries to be on guard against potential predatory lending and investment by China. He was making the case less than a week before the American election in which President Donald Trump is seeking to paint his rival, former Joe Biden, as weak on China and beholden to it.

Even before Pompeo arrived, China had fired back at the U.S. message, accusing Washington of bullying smaller nations. Pompeo, who will also visit Indonesia, pressed each country to push back against increasing Chinese assertiveness in the Indo-Pacific.

U.S. officials complain that development and infrastructure projects benefit China more than the presumed recipients — a refrain Pompeo repeated with Sri Lankan Foreign Minister Dinesh Gunawardena. Pompeo said the country could be “a beacon” for freedom and democracy in the region as long as it retained its "full sovereignty.”

“That is quite a contrast to what China seeks," Pompeo said. "The Chinese Communist Party is a predator. The United States comes in a different way. We come as a friend and a partner.”

President Gotabhaya Rajapaksa told Pompeo that he is not ready to compromise his country's sovereignty in relations with other nations, the president's office said.

He defended Chinese-funded projects, saying Beijing has helped develop his country’s infrastructure and that Sri Lanka has not been caught in a “debt trap” as a result, it said.

Gunawardena also appeared unwilling to get involved in the spat with China, and said Sri Lanka is willing to with all friendly countries.

“Sri Lanka is a neutral, non-aligned country committed to peace,” he said. "We hope to continue in our relations with the United States and with other parties.”

Earlier this month, Beijing announced that it would provide Sri Lanka with a $90 million grant to help rural development, after Rajapaksa sought help from a visiting Chinese delegation in disproving a perception that China-funded megaprojects are “debt traps.”

Similarly, the Maldives, a tiny archipelago nation in the Indian Ocean known for its luxury tourist resorts, is facing major debt of more than $1 billion for Chinese infrastructure projects. President Ibrahim Mohamed Solih has expressed concern about the amount.

In a nod to U.S. concerns about Chinese influence, Pompeo announced that the U.S. would open an embassy in the Maldives for the first time since the countries established diplomatic relations in 1966.

between the U.S. and the Maldives has “taken on new importance as the Chinese Communist Party continues its lawless and threatening ," Pompeo said. He accused China of encroaching into sovereign economic zones, “trashing the environment" and massive Illegal fishing. “America is different,” he said. “We respect sovereignty.”

The Maldives' foreign minister, Abdulla Shahid, made no mention of China by name but said his country needs “more flexibility” in international debt relief and urgent international consensus on climate change, which he called an existential threat to his nation. He also said that security in the Indo-Pacific depends on strengthened between the Maldives and the United States.

China considers Sri Lanka and, to a lesser extent, the Maldives to be a critical link in its massive “Belt and Road” global infrastructure building initiative and has provided billions of dollars in loans for projects over the past decade. The projects include a seaport, airport, port city, highways and power stations in Sri Lanka and roads and bridges in the Maldives.

Critics like the U.S. say that the Chinese-funded projects are not financially viable, and that Sri Lanka and the Maldives will face difficulties in repaying the loans.

In 2017, Sri Lanka leased out a Chinese-built port located near busy shipping routes to a Chinese company for 99 years to recover from the heavy burden of repaying the Chinese loan the country received to build it.

Responding to Pompeo’s remarks in Sri Lanka, Chinese foreign ministry spokesperson Wang Wenbin said the secretary of state’s true intention was to “let China fall back to an era of poverty and undevelopment, and let the world fall into the abyss of confrontation and division.”

“This is just the biggest threat facing the world today. But regrettably, Pompeo was born in the wrong time. The trend of peace, development, and win-win in this era is irresistible,” Wang told reporters at a daily briefing on Wednesday.

China will “continue to work with Sri Lanka to unswervingly expand the strategic and partnership between the two countries, benefit the two peoples and make our own contributions to regional peace and stability,” Wang said.

The U.S.-China tug-of-war plays out against concerns that the Sri Lankan government is backsliding on democratic reforms. Last week, Parliament by a large majority approved a amendment concentrating powers under Rajapaksa and reversing efforts a previous government had made to curb authoritarianism.

With the change, Rajapaksa will be able to hold ministries, as well as appoint and sack ministers. He will also be the appointing authority of the elections, public service, police, human rights, bribery or corruption investigation commissions.

In his meeting with Rajapaska, Pompeo “stressed the importance of strengthening democratic governance, human rights protections, and of fundamental freedoms to ensure long-term stability and prosperity," the State Department said in a statement.

Sri Lanka has been ruled under a powerful executive presidential system since 1978, but a reformist government in 2015 clipped much of the president’s powers and gave them over to Parliament and independent commissions, saying successive presidents had been more authoritarian.

Pompeo arrived in Sri Lanka late Tuesday from India, where he and Secretary Mark Esper had stepped up the Trump administration’s anti-China message by playing on Indian suspicions about the Chinese to shore up a regional front against Beijing in the Indo-Pacific.

Just hours before the meetings in New Delhi began, the Trump administration notified Congress of plans for a $2.37 billion sale of Harpoon missile systems to Taiwan — the second major arms sale in two weeks to the democratic island that Beijing regards as a renegade province. China angrily reacted to the first sale by announcing sanctions on U.S. contractors.

Trooper-shooting suspect killed in shootout with US marshals
Dec 4, 2020 5:16 AM
Fauci apologizes for suggesting UK rushed vaccine decision
Dec 4, 2020 5:15 AM

India's winter of discontent: Farmers rise up against Modi
Dec 4, 2020 5:14 AM
Comments
We welcome your feedback and encourage you to share your thoughts. We ask that you be respectful of others and their points of view, refrain from personal attacks and stay on topic. To learn about our commenting policies and how we moderate, please read our Community Guidelines.