BANGKOK — Pro-democracy demonstrators in Thailand returned Thursday to the capital’s business district, staging something akin to a street fair to bring attention to their contention that the country’s monarchy holds too much power and influence.
Oct 29, 2020 8:45 AM By: Canadian Press 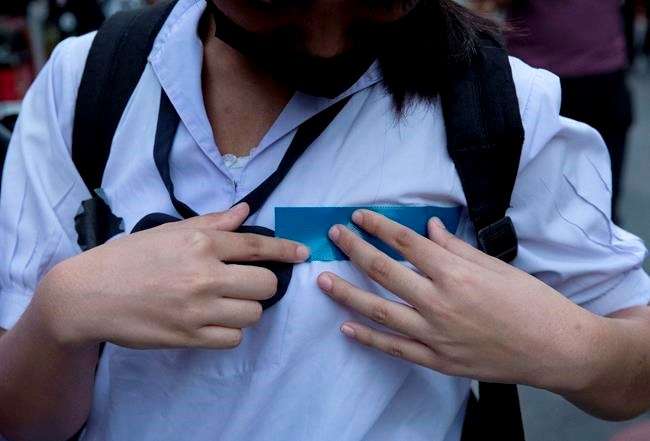 BANGKOK — Pro-democracy demonstrators in Thailand returned Thursday to the capital’s business district, staging something akin to a street fair to bring attention to their contention that the country’s monarchy holds too much power and influence.

Their rally on the city’s Silom Road was billed as a counterpoint to a fashion show being held Thursday evening by Princess Sirivannavari Nariratana, a daughter of King Maha Vajiralongkorn.

The princess is a fashion designer and has several shops at malls and shopping arcades in Bangkok selling her luxury goods.

A large crowd that gathered after working hours took over a portion of the street, looking at a displays of artwork and posters, serious and satirical, and listening to mostly impromptu speeches.

Sarcasm and satire have played a major role in recent protests, as was the case again Thursday as a red carpet was unrolled on the street to serve as a fashion runway for men and women to vamp in front of an amused crowd, often making fun of the king's gestures and appearance.

The student-led protesters have been holding rallies almost every day, attracting crowds on short notice that sometimes exceed 10,000.

They want Prime Minister Prayuth Chan-ocha to step down, the constitution to be amended to make it more democratic, and reforms to make the monarchy’s activities more transparent and accountable.

Prayuth first became prime minister in a military government after staging a coup as army commander in 2014, and continued in office last year after a general election held under a new constitution and other laws enacted during military rule to disadvantage existing political parties.

Prayuth has said he will not leave the job under pressure, but his government has indicated it is amenable to have Parliament consider amending the constitution.

The protest movement also charges that King Vajiralongkorn wields an inordinate amount of power in what is nominally a democracy under a monarchy. The palace controls a fortune that is estimated to be at least $40 billion, making it the world’s richest royal family.

The monarchy has long been considered an untouchable institution, revered by a large part of the population and protected by a lese majeste law that mandates a three-to-15-year prison term for anyone found guilty of defaming the monarch and his immediate family.

The criticism of the royal institution by the protest leaders, low-key at first but now increasingly outspoken, has stunned many Thais, since the subject has long been one not discussed in public.

On Tuesday, protesters rallied outside the German Embassy to present a letter to the ambassador asking his government to investigate whether King Vajiralongkorn is carrying out political activities during his frequent visits to Germany.

Thai royalists have recently been holding counter-demonstrations, but so far they have lacked the numbers and enthusiasm of the pro-democracy activists. After a recent attack on student protesters by several attendees of a royalist rally in Bangkok, there are concerns that more violence could break out.

Chonticha “Lukkate” Changrew, a protest leader, said Thursday that it is time to ask the government how the students' peaceful rallies will be protected by the state, “how they will control and stop the people who try to provoke, to use violence against us.”

King Vajiralongkorn in the past week has made several unusual public appearances, walking along with Queen Suthida and other members of his family to greet crowds of faithful monarchists who gathered to see him. These events have been captured on smart phone videos and spread widely on social media.

Tokyo Olympic organizers plan to host 18 test events
Nov 27, 2020 1:58 PM
Comments
We welcome your feedback and encourage you to share your thoughts. We ask that you be respectful of others and their points of view, refrain from personal attacks and stay on topic. To learn about our commenting policies and how we moderate, please read our Community Guidelines.